Nicola is a PhD student from the Drug Control Centre at King’s College London. She will play an important role during the London 2012 Olympic and Paralympic Games this year 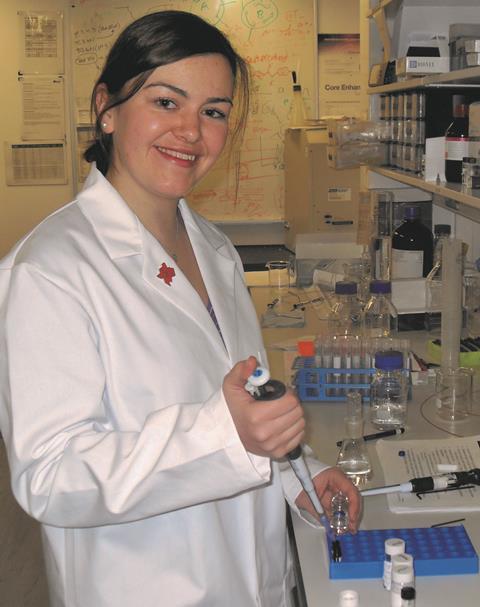 In partnership with GlaxoSmithKline, King’s College London will run the anti-doping laboratories in Harlow and Nicola will join the team of scientists as an assistant analyst. For the last three years, Nicola has focussed on an analysis technique called liquid chromatography with mass spectrometric detection during her PhD at King’s. This method involves separating, identifying and quantifying compounds within a sample to obtain more accurate and sensitive results. This knowledge and experience will be put into practice once the athletes arrive in London for the Games.

‘As an assistant analyst during the Games I will be involved in preparing the samples and operating the instruments for analysis,’ Nicola explained. ‘Each sample will undergo a series of screening procedures to detect prohibited substances. The liquid chromatography-mass spectrometry screening method which I will be focusing on looks for a variety of compounds such as stimulants, diuretics, glucocorticoids and beta-blockers. Following the initial screen, any suspicious results will be confirmed with a second more specific analysis. Also, certain compounds are tolerated for therapeutic use, but considered banned if used above these threshold levels.’

Above or below threshold?

‘Just confirming the presence of the compound is not enough, we also need to quantify the compound to determine whether it is above or below the threshold level.

‘We will receive over 6000 samples during the Olympic Games, so one of the major challenges is the number of samples to we have to analyse in the short turnaround time – as little as 24 hours before results must be reported.

Commenting on London 2012 and her own personal contribution to such a global event, Nicola said ‘It is such an exciting time to be in London – it gives me the opportunity to apply my knowledge to this immense event that’s going to be watched by millions of people around the world. To be part of something so huge is absolutely incredible. We’re going to get the chance to work in a brand new lab, with brand new instruments, and with people who have had years of experience. I can’t wait!’

In the 2008 summer Olympics in Beijing, 4770 drug tests were carried out. Of these, 20 were confirmed as cases of illegal doping.

Before her PhD, Nicola completed her master’s in Forensic Science at King’s. During this time she learnt fundamental analytical techniques, increasing her interest and knowledge in anti-doping. She also covered forensic biology, including DNA and trace analysis as part of her studies, but it was the analytical aspects within chemistry that she was drawn to. Nicola commented ‘I was definitely inspired by this master’s – studying toxicology and detecting drugs in body fluids definitely sparked my interest.’