Nobel chemistry rises to the surface

Gerhard Ertl of the Fritz Haber Institute of the Max Planck Society in Berlin, Germany, received the 2007 Nobel Prize in chemistry for his pioneering studies of chemical processes on solid surfaces. The insights provided by his work help explain many processes, such as catalysis, in the production of fine chemicals, agrochemicals and pharmaceuticals 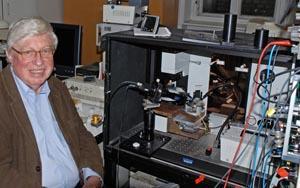 In the 1960s, Gerhard Ertl began to explore how techniques emerging from the fledgling electronics industry - such as high-vacuum methods and chemical vapour deposition techniques for coating one material with a very thin layer of another - might be used in the investigation of how atoms, molecules, and ions interact at surfaces. He showed how different experimental procedures could be used to provide a complete picture of a surface reaction.

Ertl originally focused on the Haber-Bosch process. This key industrial process grabs nitrogen directly from the air, fixing it as ammonia molecules, which can then be used to make artificial fertilisers for agriculture.

The process involves high temperatures and pressures and an iron catalyst. The extreme conditions are essential but expensive and chemists would like to find a way to fix nitrogen using much less energy. Understanding exactly what happens at the surface of the iron catalyst could allow chemists to improve the efficiency of this process or find a more effective catalyst. Ertl also studied the oxidation of the gas carbon monoxide on the noble metal platinum. This is the basic reaction that takes place in the catalytic converter section of a vehicle exhaust system for reducing toxic emissions.

Surfaces can be very chemically active and because of this it is difficult to keep them clear of impurities. Passing atoms, ions and molecules can so easily stick, react, and so change the surface. To study a specific reaction on an active surface high vacuum systems were essential to experimental success. In air, any surface is immediately covered by molecules from the gases present.

Ertl used high-vacuum techniques for making 'clean' surfaces so that the absorption and desorption of hydrogen, for instance, might be studied using LEED (low-energy electron diffraction). Using molecular modelling, he was then able to provide a quantitative description of how hydrogen is exposed on a metal surface. Such studies are highly relevant to understanding catalytic mechanism because the absorption and activation of hydrogen atoms on the catalyst surface is one of the key steps. A feature of Ertl's approach to science is to revisit such fundamental problems to uncover new insights.

Today, Ertl's approach continues to provide important insights in a wide range of chemical studies with enormous scientific and economic impact. Surface studies continue to produce vital information about specific reactions and why certain materials and highly porous materials are so reactive. It is already pointing the way to improving catalysts, has led to the development of new, improved catalytic converters, and the components for fuel cells that convert raw organic molecules, or hydrogen, directly into electricity, ultimately to reduce greenhouse gas emissions. Surface science can help explain the destruction of the ozone layer, which is partly caused by reactions on the surface of tiny atmospheric ice crystals, and even why iron rusts.

This year's Nobel Prize in physics once again has a strong chemical component. It was awarded jointly to Albert Fert of the Université Paris-Sud, in Orsay, France, and Peter Grünberg of the Forschungszentrum Jülich, Germany for their discovery of Giant Magnetoresistance. They each receive half of the prize money (10 million Swedish Kronor, ca £765k). It is money well deserved, because this seemingly esoteric sounding phenomenon has been exploited with the help of materials scientists to bring us the modern computer hard disk that packs ever more data onto a smaller space.

In 1988, Albert Fert and Peter Grünberg independently discovered a new physical effect that became known as Giant Magnetoresistance or GMR, in which very weak changes in the magnetic properties of a material give rise to a giant change in the material's electrical resistance. Researchers were quick to spot the potential of this phenomenon in reading data from hard disks in which bits and bytes registered magnetically on media such as disk must be converted to an electric current to read them.

A hard disk stores information, such as an mp3 file or a digital photo, in the form of microscopic magnetised regions. Data are read by a head that scans across the disk and registers these magnetic changes. However, the smaller the hard disk, the smaller and weaker the individual magnetic areas, which means the read-out head needs to be increasingly sensitive the smaller the disk if more information is to be packed in. A read-out head based on the GMR effect can convert very small magnetic changes into differences in electrical resistance and therefore into read-out current.

Thanks to the GMR effect and the materials scientists who have developed magnetic materials composed of nanoscopic particles to exploit it, disks just a few centimetres in diameter can store gigabytes of information. This in turn has allowed notebook computers to displace desktop PCs and some portable electronics devices, such as mp3 players, PDAs (personal digital assistants) and compact video players, to store thousands of documents, music files, and hundreds of full-length films.