Fuel cells will be used to power everything from laptops, through cars and buses, to hospital electrical systems. Finding materials that are lightweight and can soak up H2 gas like a sponge will be key to this technology

Fuel cells work in a similar way to electrical batteries but instead of the fuel supply being a solid or liquid inside the battery, the fuel - usually hydrogen gas - is pumped into the cell. The hydrogen passes through to the anode where it is oxidised by a platinum catalyst, and electrons are released in the process. At the cathode hydrogen is oxidised to water. The charge transfer within the fuel cell is brought about by the movement of ions through an electrolyte between the anode and the cathode. The electrons flow from the anode through the external electrical load to the cathode, producing an electric current (See Fig). 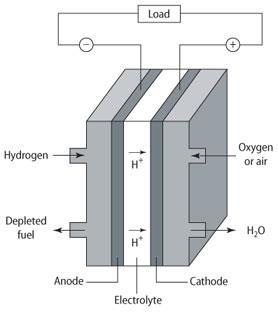 Fuel cells can produce electrical power continuously, as long as they have a constant fuel supply. They are highly efficient - unlike traditional energy sources such as engines, they have no moving mechanical parts, and they last longer than conventional batteries because their electrodes do not deteriorate with use. They produce no pollutants - the only byproduct is warm water - and can be used to power all kinds of electrical equipment, vehicles, and buildings as well as remote devices, such as spacecraft and weather stations. A combined heat and power system (CHP) in your house could take in natural gas, produce electricity and the byproduct of heated water could be used for central heating.

So, why are we not using this 'green', environment-friendly technology? Well, we are, but there is a problem. While conventional batteries are self-contained, a fuel cell must be hooked up to a fuel supply. To run a car powered by a fuel cell for anything more than a short trip would mean carrying a huge tank of hydrogen, which is not only hazardous but reduces the overall energy efficiency of the car.

Chemists rise to the challenge

Chemists are looking to solve this problem by making novel materials that can trap hydrogen and other fuel molecules safely in a small volume.

Early research into hydrogen storage materials focused on metal hydrides, such as boron or lithium hydrides. These absorb hydrogen and give out heat as they do; warm them and they release the hydrogen. They can be liquid or solid pellets. However, the downside is that metal hydrides are heavy, so transporting them reduces the overall fuel efficiency.

There are alternatives on the horizon. Omar Yaghi at the University of Michigan and his colleagues at Arizona State University have made new metal-organic materials that should offer the right characteristics for use as H2 -storage materials. These materials are highly porous and therefore lightweight. The total surface area of all the pores within a single gram of these materials adds up to several thousand square metres. This is enough to absorb a gram of H2 gas .

Yaghi's materials are based on crystalline molecular organic frameworks (MOFs), made by reacting a metal salt, such as zinc nitrate, with an organic compound such as BTB (4,4',4"-benzene-1,3,5-triyl-tribenzoic acid). The materials are mixed and slowly heated to 100°C for 23 hours and then cooled to room temperature. The product is a highly microporous crystalline material in which the zinc atoms are held apart to form pores by the bulky organic groups. The current record for one of Yaghi's MOFs is a surface area of ca 4800 square metres per gram of material, which is the lowest density ever recorded for a crystalline material.

Meanwhile, in the UK, Cardiff University's Neil McKeown and collaborators Peter Budd of the University of Manchester, and David Book of the University of Birmingham and their colleagues are using a different approach to synthesising novel microporous materials. They are using polymers - chain-like molecules composed of repeating units - to create lightweight materials with high internal surface areas. The molecular chains in most organic polymers are flexible and can pack efficiently in tight structures. So, to make a porous polymer requires monomer building blocks that would result in inflexible chains. 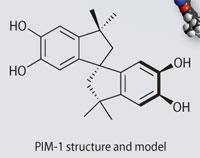 With this in mind, the team constructed polymers from molecules containing fused chemical rings that form a stiff strip. By introducing the occasional twist in the strip, the team could produce a contorted but stiff polymer structure. The molecules cannot pack together efficiently so there are tiny gaps between the chains. These 'polymers of intrinsic microporosity' (PIMs) have a vast internal surface area. An example is PIM-1. A gram of such a polymer has a pore surface area equivalent to three tennis courts, or 800 m2, to which hydrogen molecules can stick. While this does not approach Yaghi's much larger surface areas, McKeown's materials are much lighter and so would be more fuel efficient. Moreover, McKeown believes porous polymers have a higher concentration of smaller holes which are more suitable for trapping hydrogen firmly. McKeown and his colleagues reckon that by 2010 they will have succeeded in optimising their polymers to a commercially viable level.

There are many other teams working on the hydrogen storage problem. Scientists at NREL (National Renewable Energy Laboratory) in Golden, Colorado, US, for instance, are hoping nanotubes - rolled up sheets of graphite with C60caps - will offer a useful solution. Carbon nanotubes are hollow and have a diameter equal to several hydrogen molecules and so a large volume of the gas could be absorbed by these materials. The US scientists have shown that hydrogen can be pulled into carbon nanotubes, like milkshake through a drinking straw. They are now looking for ways to make bundles of aligned nanotubes that would act as hydrogen sponges and could be packed into a container for hydrogen storage.

One aspect of this ongoing research that emerged recently is that such materials can store hydrogen at much greater volumes than critics predicted, which ultimately means longer journeys on a single tank. To be viable, gas uptake by these materials needs to be at least 9 per cent by weight so that enough gas can be stored to allow a sensible journey to be undertaken. At the moment researchers are obtaining less than half that, but McKeown is confident of approaching 6 per cent within three or four years and other researchers are even more optimistic.

The hydrogen economy is currently something of a buzz phrase - hydrogen storage is the key to making it work.

The H2 required for fuel cells is produced via the steam reforming process using hydrocarbons (natural gas) as the feedstock:

The reaction is endothermic, requires a metal-based catalyst and needs high temperature (ca 1200K), so energy is wasted in the process. However, the CO produced can be reacted via the water gas shift reaction to produce more H2:

This reaction is also endothermic, CO2 is produced so H2 production is not carbon neutral.

One way of making the overall process carbon neutral would be to use a biofuel - such as ethanol - as the starting feedstock. CO2 would then be used up by the growing crops for the next batch of biofuel. Further, if ethanol is used, the steam reforming process can be done at much lower temperature so less energy is wasted.