Ian Abrahams, the London Institute of Education, investigates the role practical work has in motivating students 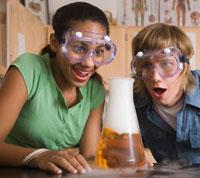 A moment of inspiration

Ian Abrahams from the London Institute of Education has investigated the role practical work has in motivating students.1 Working with eight schools, he observed lessons where practical work was being used in key stages 3 and 4, and interviewed students and teachers before and after the lessons to determine the value of the practical work.

Almost all of the students questioned said they liked practical work but when probed further it became apparent that many students simply preferred it to other methods of teaching science. There was a marked change in the type of response from year 7 students, the majority of whom considered practical work to be exciting and fun, to year 11 students, who saw practical work as less boring than other parts of the lesson.

In the discussions with teachers it became apparent that when they referred to students being motivated by the practical work they tended to relate this to the interest the students had in the activity during the lesson. There was no recognition that the effect of the practical experience would endure beyond a particular lesson. Some of the teachers commented that practical work played an important role in the management of students' behaviour. In particular, they viewed recipe-style practical tasks as a good way of occupying academically low-ability students rather than asking them to write or think about scientific ideas.