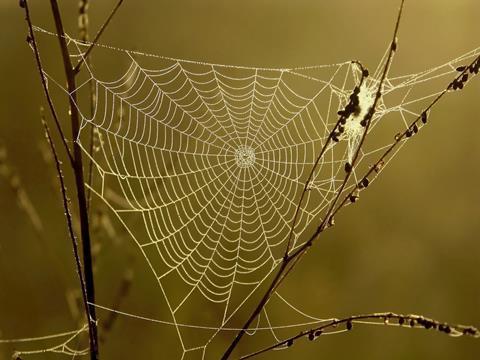 Gram for gram, spider silk has a breakage energy 100 times higher than steel and an elasticity far greater than natural rubber. Spider silk also has a low density and stiffness and would be the ideal material for engineering and technological applications, but for one small detail. How do you mass produce the material without coercing billions of spiders to do the job? Recently, however, work by Thomas Scheibel's research group at the Technical University of Munich has led towards a better understanding of spider silk that might one day lead to a synthetic version with many of its desirable properties. The researchers have discovered that key to the spider's spinning success is the interaction between the water friendly, hydrophilic, and fat friendly, lipophilic, properties of different silk proteins.1

The spinning of spider silk represents a phase change from a solution of protein molecules into a solid thread. Clues about silken behaviour came from the way in which orb weaver spiders somehow manage to spin out two different types of thread from the same spinneret, their silk-making gland. They use the first form to spin the edges and spokes of their webs and the second to create a safety line with which they can escape predators.

The Munich team used genetic engineering to produce one of the spider silk proteins of the European garden spider (Araneus daidematus). Using protein dialysis to purify the materials, they noticed that the silk solution had a tendency to separate into two different fluid layers. One fluid phase consisted of protein molecules joined together in pairs, while the second consisted of bigger aggregates (oligomers), in which several protein units are linked.

When they added potassium phosphate, a natural initiator of silk aggregation, to the protein solution, the researchers could pull threads of silk from the mixture. This property, they explain, suggests that the two different forms of silk differ only subtly. 'It is clearly not a structural change in the protein', explains Scheibel, 'but rather the degree of oligomerisation that is crucial for thread formation'.

'Our insights form a foundation for establishing an effective spinning process for the production of genetically engineered spider silk', says Scheibel.