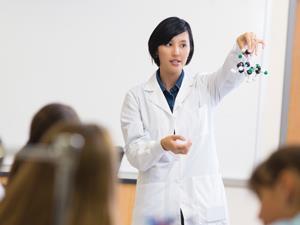 A report published in July by the Organisation for Economic Co-operation and Development's (OECD) Centre for Educational Research and Innovation finds that countries with greater levels of innovation in education see improvements in certain educational outcomes, including higher performance in mathematics, more equitable learning outcomes across ability and more satisfied teachers.

Measuring innovation in education, which looked at the education systems of 22 of its member countries and identified the top five innovations at both the organisational and classroom levels, also finds that innovative educational systems generally spend more than non-innovative ones, though their students are no more satisfied.

OECD, the organisation that runs the PISA (programme for international student assessment) tests for 15-year-olds in science, mathematics and reading, comments that the report represents the first attempt by OECD, or any other organisation, to measure innovation. 'The ability to measure innovation', the report states, 'is essential to any improvement strategy in education'.

Stéphan Vincent-Lancrin, senior analyst at OECD, explains that 'innovation' in the report is defined as 'new or significantly changed practice in pedagogy, school organisation or “relation to clients”' over the period of study, between 1999 and 2011. The findings are based on information taken from a wide variety of international datasets, including TIMSS (Trends in International Mathematics and Science Study) and PISA. 'What we have used are the context questionnaires asking teachers, school principals and students about teaching and organisational practices. As some of the questions were repeated over time, we could see what has changed at system level, and infer from that where the innovations have been located in practice,' says Stéphan. The 'top' innovations, he says, are defined by the size of change, though human judgement inevitably plays a small part.

The report finds that one of the top organisational innovations in English secondary schools is the provision of remedial education in mathematics and science, followed by an increase in enrichment education in these subjects at both primary and secondary levels. There has also been a 21% increase in inspections of '8th grade' (age 13–14) secondary science teachers between 2003 and 2011.

Top of England's innovative pedagogic practices is the requirement that students should be able to explain and elaborate their answers during secondary school science lessons. The country has also witnessed an increase in emphasis on student-directed experiments and on the practice of relating content in secondary science lessons to students' daily lives.

The top policy innovation in Singapore, one of the highest performing countries in the 2012 PISA tests, is the use of incentives to promote teacher recruitment and retention in schools. Another major innovation, the report finds, is the increase in parental involvement in secondary school projects, trips and programmes of study, as well as an increase in the use of external inspectors and enrichment education in secondary science education. According to the report, as of 2007, c.94% of 13–14-year-olds in Singapore were enrolled in schools offering enrichment science education, compared to an OECD average of 53.5%.

A note of warning

While many of the innovations cited for England will be welcomed, the findings nevertheless need to be viewed with some caution. Keith Taber, educational researcher at the University of Cambridge, explains, 'One needs to have some reservations about the findings of such a survey given the difficulties of collecting data in comparable ways across different education systems. For example, there may be cultural differences in how innovation is understood, or in what is considered innovative. Also, innovation is not automatically a positive thing, so it is difficult to know how to interpret the overall rankings of different nations. For example, the reported increase in the incidence of English science teachers being observed by external evaluators is not of itself a good thing. It might have reflected a concern about low teaching quality for example, although in practice it probably reflects the increase in the accountancy culture that can be interpreted as part of a gradual undermining of the professional status of teachers in the UK context.’

John Holman, emeritus professor of chemistry at the University of York adds: 'Correlation doesn't necessarily mean causality – it doesn't follow that if countries innovate highly and have high attainment, it is the innovation that is causing the high attainment.' Furthermore, he agrees that 'innovation' in itself is not necessarily a good thing; there have been several examples in England, where innovation has led to reduced educational standards. The introduction of the Initial Teaching Alphabet in England, for example, actually led to reduced reading standards, he says. 'However, innovation that is underpinned by research evidence and shown to be effective – via piloting, testing etc – can lead to higher educational standards, if it is properly implemented.'

One of the biggest barriers to quality research-based innovation in England at least, explains John, is the lack of stability in the school curriculum, and this needs to be addressed. 'Over the past 30 years, the National Curriculum for science has changed 10 times. Such externally imposed “innovations” stop teachers from implementing innovations that would actually lead to improved educational outcomes. This is not the case in countries such as Singapore, where they plan for years before they make any change to the curriculum.’