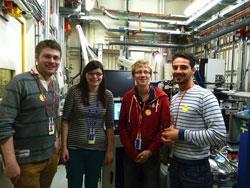 Joshua Sauer was awarded the Royal Society of Chemistry Prize at the UK National Science and Engineering Competition in March, for a Nuffield Foundation project he undertook at the university last summer.

The project, which was on data processing at the molecular level, was conducted under the supervision of Howard Colquhoun and colleagues in the university's department of chemistry.

Joshua,18, said: 'My five weeks spent at the University of Reading gave me a fantastic insight into the world of chemistry research. I found the whole experience fascinating and highly enjoyable, and at the end of the five weeks I felt like an honorary member of the research team.'

His journey started last summer when Joshua obtained a work placement through a Nuffield Research Award. Joshua contacted Howard to ask if he could carry out a project in his research group. Howard was delighted to accept the request and Joshua spent five weeks in the Department working closely with Reading experts who taught him the synthetic chemistry needed for the project.

After returning to St Bernard's Catholic Grammar School in Slough, Joshua was encouraged by the Nuffield Foundation to enter his project in the UK National Science and Engineering Competition, organised by the British Science Association. Joshua made it to the finals, which were held in March during the 'Big Bang' science fair.

Joshua was jointly awarded the Royal Society of Chemistry prize for his project and also made it into the final five in the overall science competition.

Howard said: 'Many congratulations to Joshua. He was a delight to work with and has a very bright future ahead of him. Chemistry is fundamental to practically every aspect of modern life, from microelectronics to medicine. Supporting the next generation of talent is vital so that we continue to produce highly skilled researchers needed for the country's future success.'

Joshua has since been offered a place to study chemistry at Oxford University.