Science Experiments, a book packed with fun and exciting experiments young people can do at home, has won the Royal Society Young People's Book Prize 2012 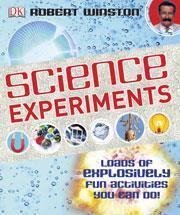 The book is by Robert Winston and Ian Graham and published by Dorling Kindersley. It was chosen from a shortlist of six by over 1000 young people from 120 schools and youth groups around the UK.

The 1st Strathpeffer Brownies said: 'This book was inspirational - the best science book we've seen. It is eye catching, filled with great pictures and vivid colours. This book caused a storm at our meeting - loads of excited chatter, interesting facts and a real eagerness to get experimenting.'

The shortlist from which the young people chose a winner was selected by an expert adult judging panel, When selecting the book, they said: 'This brilliant book contains clear instructions for loads of great experiments, from things that you can try yourself (without getting in trouble from your parents), to spectacular tricks to try with adults present. Lots of books on experiments cover the same old ground, but this book goes way beyond the usual content and contains plenty of experiments that we'd never seen before.'

The prize was awarded at a ceremony at the Royal Society in London last week. The book wins an award of £10,000 and the shortlisted books each receive £1000.

This is the second time that Robert Winston has won the prize (having previously succeeded in 2005 with What Makes Me Me?).  Upon accepting the prize, Professor Winston said:

'it seems to me that it is ever more important that we communicate science to everybody in society. So this prize - and prize money - will go towards the Reach Out Lab at Imperial College, where we bring children of all ages into the college and they do science experiments with a background of maths to improve science literacy.'

More information about the prize can be found on the Royal Society's website.

Science Experiments by Robert Winston
Purchase this book from Amazon.co.uk