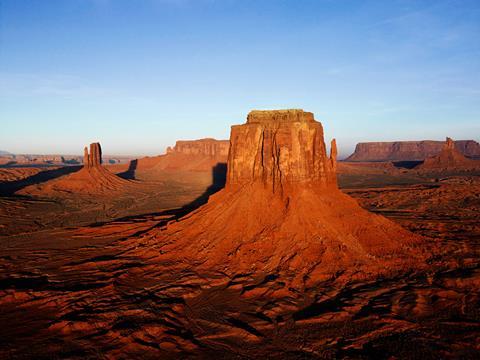 According to scientists based in the Netherlands, gypsum could become a novel source of fresh water in desert regions.1

A rocky mineral abundant in desert regions where fresh water is usually in short supply, gypsum, calcium sulfate dihydrate (CaSO4.2H2O), is 20 per cent water by weight. Peter van der Gaag of the Holland Innovation Team (HIT), in Rotterdam, suggests that a macro-engineering project designed to dehydrate deposits of the mineral could release trillions of litres of clean water suitable for drinking and irrigation purposes in desert regions.

The dehydration process requires energy, but this is not in short supply in deserts, where sunlight is abundant, and in many cases fossil fuel deposits are mined and energy wasted as unwanted gas is flared on oil and gas fields. Van der Gaag explains that it takes only moderate heating to liberate water from gypsum, converting the mineral to its anhydrous form anhydrite. 'Such temperatures can be reached by small-scale solar power, or alternatively, the heat from flaring oil wells could be used', he says. 'And dehydration under certain circumstances starts at 60 Celsius, goes faster at 85 Celsius, and faster still at 100 degrees'.

The dehydration of gypsum results in the volume of the material being reduced substantially. So releasing water from shallow underground layers of gypsum will cause local subsidence, forming an instant reservoir for the water.

HIT has worked on this project since 1987, collaborating with mines based in France and Mauritania, and small-scale tests on pure gypsum blocks have already proved successful. The team is planning a pilot study at a suitable desert location, in which several methods of heat supply and water capture will be tested.

But could gypsum become a sustainable water source? 'On a geological time scale it will always be rehydrated on the Earth's surface, though it might take tens of thousands of years. But fine grained pure gypsum - which we found in the desert - will rehydrate very easy', van der Gaag told Education in Chemistry. He added, 'It looks like it will be turned into gypsum after a few weeks with heavy desert rains. This makes it good for storing water in the desert. Furthermore, fine grained pure gypsum from the deserts might be used as a fertiliser (with water) elsewhere.'