In July the recently formed Science Diploma Development Partnership (SDDP), chaired by Professor Hugh Lawlor, began a consultation process on the purpose of the Science Diploma. It's an opportunity for the educational and scientific communities to say what they want from this qualification

In 2011, under current Government proposals, the Science Diploma, will be in our secondary schools and colleges. Originally put forward by Sir Mike Tomlinson in his review of 14-19 education in 2004, his vision was a 'unified framework of diplomas', which would detail the level (up to four) and breadth of attainment and progression into further learning, training or employment. The 'main learning' would incorporate the requirements of the National Curriculum for 14-16-year olds, and post-16, the GCE A-levels. Tomlinson's vision was short-lived - the Government didn't act on his recommendations.

Less than a year ago the Secretary of State for Education Ed Balls announced a surprising u-turn with the development of three diplomas - in science, languages and the humanities - to complement the 14 vocational diplomas already available. The three diplomas would be different to the original 14 since they didn't have a direct link to one sector of the economy. 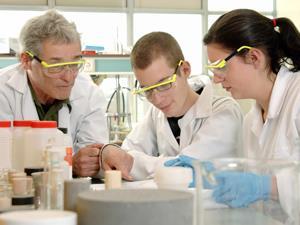 What's the future for science education?

This summer the newly formed Science Diploma Development Partnership (SDDP), chaired by Hugh Lawlor, professor of education at Canterbury Christ Church University, began a consultation process with the educational and scientific communities with what seemed to be a clean sheet of paper. On SDDP are representatives from universities, industry, schools and colleges, the Qualifications and Curriculum Authority (QCA), and the awarding bodies among others. Everything to do with the Science Diploma was up for discussion - its vision, purpose, what should be covered and how, and what factors would be critical to the success of the diploma. At this stage, it was unclear whether the Science Diploma would be an applied or academic qualification, or an overarching qualification aimed across the full ability range as suggested by Tomlinson.

In this first (albeit brief) phase of the consultation process, the SDDP puts forward some suggestions for a qualification that would prepare youngsters for university studies or work with a knowledge base that is both broad and deep, and with the practical skills required by business and industry. Students would be encouraged to understand the diversity of employment opportunities in science, and more of them would be expected to acquire world-class scientific skills and knowledge. Students would explore the world of scientists and understand how it relates to their needs and ambitions for the future.

In its response, the Royal Society of Chemistry (RSC) comments that the Science Diploma needs a unique selling point that makes it different to GCSEs and A-levels. 'It will be critically important', the RSC adds, 'to ensure that the focus of the qualification is clear. If it tries to be all things to all people it will fail, and the diploma needs to ensure that the learner has clear opportunities for progression'.

A three-tier progression route is offered for discussion:

According to Colin Osborne, education manager, schools and colleges at the RSC, 'these progression routes need to be made clearer. As they stand some of the employment suggestions are wrong for a particular level. And we need to know whether level 1 satisfies the requirements of the National Curriculum, or do students have to do GCSE science as well'.

A techniques-led approach based on modern workplace practice is suggested as a way of ensuring that all learners develop the necessary laboratory skills. Transferable skills will also be important. According to Osborne, it would be impossible to get all the students to do workplacements in an appropriate environment. Simulated environments in schools, similar to those in technical schools in Germany, would be required for this to become a realistic approach. 'Indeed', he says, 'this may be an opportunity to improve lab facilities in schools and colleges'. The RSC comments that a variety of approaches to learning should also be encouraged since evidence suggests that while some learners benefit from a context-led approach, others require a concept-led approach.

The consultation document puts forward a model for organising the content of the diploma that moves away from the traditional sectors of biology, chemistry and physics. The knowledge and skills required in the workplace today, it argues, come from more than one of these disciplines. According to the RSC, central to any model should be 'what scientists do' - ie skills such as manipulating equipment; investigation; report writing; assessing validity of data; making judgements and formulating arguments; creative thinking; and problem solving. This could, the RSC adds, be underpinned by the four programmes of study from the National Curriculum, or the subject criteria for the different A-levels, and could include applications relating to the real world. Additional topics that should be included, the RSC says, are maths relevant to science, and languages.

So what will determine the success of the Science Diploma? The SDDP suggests: a strong emphasis on practical problem-solving skills; access to good laboratories and facilities; strong links with local employers; high quality teachers and laboratory technicians; and acceptance by parents, employers and HE that the Science Diploma is a rigorous and attractive alternative to the traditional qualifications.

Many teachers and academics are likely to be sceptical - after all there has been much development over the past few years both of GCSE science and of GCE science A-levels. We now have applied strands to all these qualifications, as well as options for context-led or concept-led learning. More recently there has been the introduction of OCR's Pre-U qualification and AQA's plan for an AQA Bac - do we really need more options to confuse the already stretched teachers and confused academics and employers? Andrew Hunt, science educational consultation, told Education in Chemistry, 'Sir Ron Dearing emphasised to politicians in 1996, that it takes 10 years to get broad recognition and understanding of a new curriculum. The muddled and staged start of the Science Diploma has created confusion so that in some circles they have been discredited before anyone knows what they are'.

And can we lean from past experience? According to Hunt some of the reasons that GNVQs of the early 1990s failed came down to: the specifications being developed by people remote from schools and colleges who set unrealistic targets; an assessment system that was grossly complex; changes to the specifications before they had time to settle down; lack of teacher development and support; lack of appropriate resource; and Government meddling which changed the assessment system at short notice.

Autumn should see the structure and underpinning principles in place, ready for another consultation on the finer details.