Trainee recruitment targets not met for the past five years 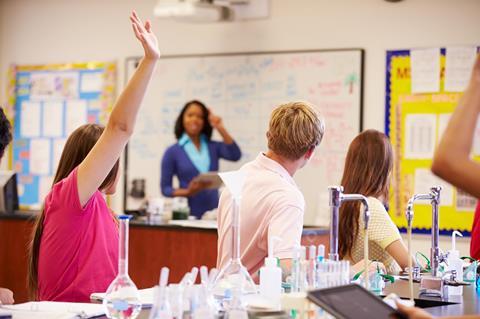 Secondary schools in England are failing to attract enough science graduates into teaching. This is despite the introduction of fast-track training schemes and financial incentives from government and professional scientific bodies aimed to attract top STEM graduates into the profession. The ‘science shortfall’ is particularly acute in physics and in schools with the largest numbers of disadvantaged pupils.

These are the main findings of a research brief by Philip Kirby and Carl Cullinane, published by the Sutton Trust in January. The researchers based their analysis on data from several datasets, including a survey of secondary school teachers by the National Foundation of Educational Research, the Independent Schools’ annual census, and the Department for Education’s (DfE’s) annual workforce census.

According to the brief, over the past five years, government recruitment targets have not been met consistently by each of the three main science subjects. In 2015/16 new entrants to postgraduate initial teacher training courses fell short by 5% for chemistry, 11% for biology and 29% for physics. While provisional data shows some improvement across all three subjects for 2016/17, they are still short of the targets. Moreover, the results show there are a higher proportion of trainee science teachers with lower than average qualifications compared to other teachers and other science graduates.

The brief also finds that in the 40% of schools with the most pupils entitled to free school meals (FSM), over a third of science teachers do not have a relevant qualification in the subject they are teaching. Further analysis of the data confirms that specialist science teachers are more common in schools with fewer FSM students. The proportion of science specialists at secondary academies is also higher than in local authority maintained schools – 86% compared to 67% – and higher in independent schools than in the state sector.

The Trust recommends more incentives should be targeted at schools with high numbers of disadvantaged pupils to ensure all children have access to specialist science teachers. This is crucial, it says, given the increasing size of the scientific job market. By 2030 there are predicted to be more than 7 million jobs in UK science based industries.

Bryn Jones, senior lecturer in the department of education at Liverpool John Moores University comments, ‘Research in this field is always welcome especially when the data reflect the reality that many schools face when filling vacancies for science teachers. In my experience work-based routes such as Teach First and School Direct are helping to solve the shortfall in science teachers – they provide an opportunity for student teachers to enjoy the benefits of academically well-qualified colleagues, who share the responsibility for their training.’