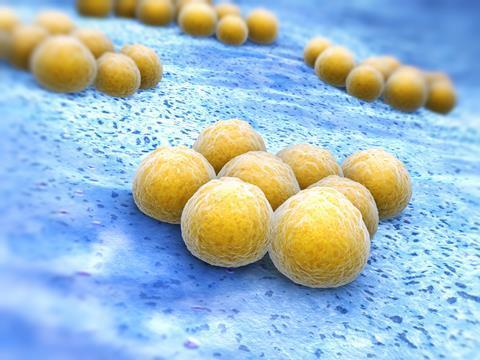 Strains of potentially lethal bacteria that are resistant to common antibiotics have appeared in hospitals across the globe in recent decades. The infamous MRSA - methicillin, or multidrug, resistant Staphylococcus aureus - is responsible for several difficult-to-treat infections in humans and is not killed by penicillin or cephalosporin antibiotics. As such, drug researchers are constantly searching for novel chemical structures that can attack MRSA. Recently, a team at Kitasato University in Tokyo, Japan, have used an intriguing method to find such compounds.

Ryuji Uchida, Masato Iwatsuki, Yong-Pil Kim, Satoshi Ohte, Satoshi Omura, and Hiroshi Tomoda have screened for new antibiotics that might work against MRSA by injecting a microbial culture broth into silkworm larvae. They found a group of compounds known as the Nosokomycins, which have activity against MRSA. These compounds share chemical structural features with the moenomycin family of compounds that are commonly used as artificial animal growth promoters and block an enzyme that prevents penicillin from working.

The researchers point out that lab-based screening methods rarely home in on active compounds quickly while animal studies are expensive and plagued with ethical issues. They suggest that using invertebrate creatures, such as the silkworm, rather than mammal species could address both issues to some degree. This novel approach to antibiotic drug discovery is still at the early stages but there is already commercial interest.