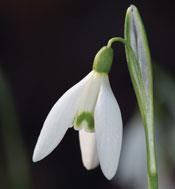 Reporting in the journal Plant medica,1 Jaume Bastida and colleagues, of the University of Barcelona's department of natural products, plant biology and edaphology,have extracted 17 alkaloids, nitrogen-containing natural products, three of which were previously unknown to chemists. They found 10 alkaloids in G. nivalis, a bulbous plant that flowers in the snows of midwinter, and seven from the related G. elwesii species, which originates in the Caucasus.

The team used a range of NMR techniques as well as electron-ionisation and high-resolution mass spectrometry circular dichroism experiments to identify the structure of the compounds.

The compounds may have potential in the development of new drugs for treating diseases as diverse as malaria and Alzheimer's. The haemantamine-type alkaloids identified - eg 3,3'-O-(3',3"-dihydroxy -butanoyl) hamyne, from G. nivalis - can cause highly selective apoptosis, or programmed cell death. This cellular process is involved in the control of cell development and growth, but goes awry in some diseases, such as cancer.

Licorine derivatives - eg 2-O-(3'-hydroxybutanoyl)lycorine, from G. elwesii - have previously been shown to have antimalarial activity. They can also block the brain enzyme acetylcholinesterase, which helps to degrade the neurotransmitter acetylcholine. This suggests that these compounds might have use in treating, but not curing, Alzheimer's disease, where improved acetylcholine activity could reduce the debilitating effects of this disease.