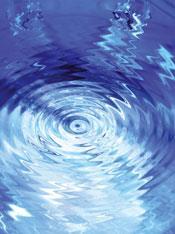 The discovery could help boost the sensitivity of nuclear magnetic resonance (NMR) spectroscopy by up to 100 000 times.

Quantum mechanics tells us that some particles, such as electrons and hydrogen nuclei (protons) have a property known as spin. Spin is unrelated to the rotation of an object, such as a ball, in the everyday world and is more akin to a type of 'charge'. Spin is designated as either up or down, but can be fractional too. A hydrogen molecule contains two hydrogen nuclei and so can have two different forms, or spin isomers, depending on whether or not the spins are aligned parallel (ortho -hydrogen) or antiparallel (para-hydrogen). Similarly, water molecules share this property and so can exist as both ortho and para water.

In 2002, Russian scientists Vladimir Tikhonov and Alexander Volkov reported how they had created droplets of ortho and para water, which lasted for almost half an hour in their separated spin states. However, other scientists have not been able to reproduce this controversial work. Now, Gil Alexandrowicz and colleagues at the Israel Institute of Technology Haifa, Israel, have used an entirely different approach that involves slowing down and cooling molecular beams of water molecules and using a sophisticated magnetic field, a hexapole magnetic field, to deflect only the ortho isomers into the detection chamber of a mass spectrometer while the non-magnetic para water remains undeflected.

The result is a sample of hyperpolarized water molecules, which Alexandrowicz suggests could lay the foundations for a new ultrasensitive NMR spectroscopic technique. In conventional NMR spectroscopy radio waves are used to probe the spin on the atomic nuclei in a molecule held in a magnetic field. Nuclear spin is 'chemically shifted' depending on the presence of different neighbouring atoms in the molecule and so the spectrum reveals information about the structure of a molecule.

In conventional NMR, only a fraction of the nuclear spins are aligned and so the technique, although powerful given a well-prepared sample, is intrinsically insensitive. However, the use of pre-aligned spins in a sample might boost signal intensity significantly. The Alexandrowicz approach to separating ortho and para water could be useful in this regard.

The team also explains how the ability to separate ortho and para water molecules and study their interaction with surfaces could be used in astrochemistry where the ratio of ortho and para water derived from measurements of interstellar radiation can be used to remotely determine the temperature of interstellar space. Knowing the lifetimes of spin isomers is important to such studies and the work of Alexandrowicz and colleagues opens up the possibility of measuring spin isomer lifetimes under different conditions, such as those simulating interstellar space.

'The lifetime of ortho and para water which was stored in liquid and solid phases and subsequently released to the gas phase again, is indeed a controversial and interesting topic, as current estimates for the storage lifetime vary by many orders of magnitude,' Alexandrowicz says. 'Separation methods of the type we presented might be used in the future to provide some definitive answers.'