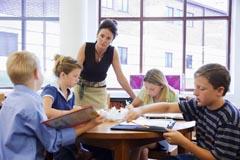 A new approach to group work can benefit all students

Researchers working on the SPRinG (Social Pedagogic Research into Group work) project, part of a larger Economic and Social Research Council (ESRC)-funded research programme on teaching and learning, have developed and evaluated a new approach to group work in primary and secondary classrooms.1

In their approach the researchers, Ed Baines, Peter Blatchford and Anne Chowne from the Institute of Education, London, stress the importance of supportive relationships within the groups. Accordingly, they designed activities to help pupils to communicate effectively through listening, explaining and sharing ideas where trust and respect are of utmost importance. In a study to evaluate the project at KS2, 560 pupils across schools in London were taught using the SPRinG principles and a control group of 1027 pupils across different London schools were taught in conventional ways. The team used two types of tests to assess the impact the new approach had on pupils' attainment in two science topics, 'forces' and 'evaporation and condensation'. Each test comprised modified SATs questions containing a mixture of open-ended and forced-choice questions which required the pupils to interpret diagrams, tables and graphs. One test assessed the long-term effect, which the students completed at the start and end of the year. To determine the immediate effect on learning pupils were set another test to complete just prior to and a short time after each topic had been taught.

Statistical analysis of the test results showed that in the short- and the long-term the pupils who had been involved in SPRinG lessons outperformed those in the control group. The SPRinG team reports that their new approach to group work was effective no matter what the ability of the pupil and equally beneficial for both boys and girls.