The murder of Rasputin

Gregory Rasputin, the 'mad monk,' dominated the life of Alexandra, the last Tsarina of Russia, and his death helped to bring down the Romanov dynasty. Alexandra believed that Rasputin had supernatural powers because he seemed able to prevent bleeding in her haemophiliac son, Alexis, the heir to the Russian throne. Because of this, the monk, who came from peasant stock and in fact had little religious training, became closely involved with the Imperial family.

The royal family, however, did not make public the fact that an heir to the Imperial throne had haemophilia and questions arose about the nature of the relationship between Alexandra and Rasputin. The gossip was that the monk was romantically involved with the Tsarina and with her daughters. The Tsar, Nicholas II, however, was reluctant to dismiss Rasputin because his wife believed that he was their son's only hope. 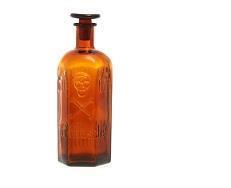 Other members of the Imperial family, however, decided to take matters into their own hands. Prince Yussupov, the nephew of the Tsar, hatched a plot to poison Rasputin with cakes and wine 'laced with enough cyanide to kill several men instantly'. Rasputin ate the poison, but the cyanide had no apparent effect and the monk died only after being shot and beaten, and then drowned in a frozen river.

Was this evidence of his supernatural powers? Probably not - simple chemistry offers a more likely explanation. The cyanide compound used was potassium cyanide. The cyanide ion - the toxic component - is a good ligand and complexes to Fe(iii) inside cells, thus shutting them down.

The potassium cyanide used by Yussupov could have been stored in damp conditions. Atmospheric carbon dioxide reacts with moisture to form carbonic acid:

This is a weak acid (pka 6.3) but it is strong enough to react with potassium cyanide to form hydrocyanic acid (pka 9.3) and potassium hydrogencarbonate.

Hydrocyanic acid (hydrogen cyanide) is covalently bonded and the molecule is a gas at room temperature. The gaseous hydrocyanic acid would have escaped into the air, leaving behind the harmless potassium hydrogencarbonate. This is a white powder and would be visually indistinguishable from the potassium cyanide.

Despite the murder plan going badly wrong, there was ample evidence of who had killed Rasputin. But Tsar Nicholas II merely exiled Yussupov and his accomplices. Rasputin, however, had achieved the reputation as a 'man of the people' and his murder by aristocrats was another nail in the coffin of the Romanov dynasty, which was soon to be swept away by the Bolsheviks during the Russian revolution.