The Salty Ocean Of Enceladus 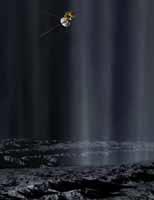 In 2005 the Cassini spacecraft made the surprising discovery that Saturn's sixth largest moon, Enceladus, ejects an enormous plume of water into space from its south pole. The plume is hundreds of kilometres high and contains water vapour, gas, and tiny grains of ice. However, the exact nature of its source remained a mystery.

A team of European researchers now has evidence that this giant plume is fed by a salty ocean.1 The discovery could have implications for our understanding of how moons are formed.

Saturn's sixth largest moon, Enceladus, orbits in the planet's outermost 'E' ring and is one of just three bodies in the outer solar system that produces active eruptions. More intriguingly, Enceladus is one of the only places in the solar system besides Earth, Mars, and Jupiter's moon Europa, for where there is evidence of water, which is the most likely solvent for life.

In 2008, Juergen Schmidt of the University of Potsdam, Germany, and Nikolai Brilliantov of the University of Leicester and their colleagues explained how the water vapour jets are blasted out much faster than the dust particles in the plume. This suggested that Enceladus must have an ocean of liquid water below its surface, but there was no direct evidence. The same team, working with Frank Postberg of the University of Heidelberg and the Max Planck Institute for Nuclear Physics, in Heidelberg, Germany, has now found evidence for this ocean.

Current theories of how natural satellites form suggest that if a moon has a deep liquid ocean in contact with the body's rocky core - for millions of years - then this ocean will be salty. The team detected sodium salts in the dust ejected in the Enceladus plume by assessing mass spectral data collected by the cosmic dust analyser on-board the Cassini spacecraft. The researchers then compared these data with mass spectra collected from their lab experiments on different sodium solutions made up to simulate the components of the plume and ocean. The research suggests that the icy grains in the Enceladus plume contain substantial quantities of sodium salts (0.5-2 per cent by mass), which the scientists say can only occur if the plume's source is a salty ocean.

Brilliantov and Schmidt have related the salt concentrations with the likely concentration in the water vapour above the ocean surface, which agrees with their experimental data. The same results imply that the concentration of sodium chloride in the ocean is close to that of Earth's oceans - ie about 0.1-0.3 moles of salt per kilogram of water.