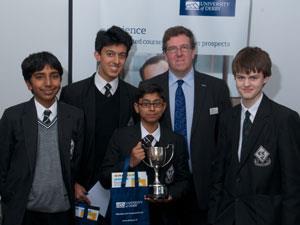 The winners, from Nottingham High School Image courtesy of David Bryson at the University of Derby

Ten teams of four students from across the east Midlands competed at the regional finals of the Royal Society of Chemistry's Top of the Bench chemistry competition at Derby University on Saturday 18 January.

To get to this stage, the teams had already ranked in the top three in their local competition heats, which had involved a chemistry quiz. The regional finals involved another challenging theory paper, as well as a practical challenge in which the students had to ‘Save Dr Who’s TARDIS’ by setting up a cooling reaction to reach a specific temperature in exactly one minute. Through this, the students were challenged in teamwork skills, theoretical knowledge, practical ability, and problem solving skills.

After completing this task, the competitors enjoyed a practical display of reactions involving chemiluminescence, or chemical reactions producing light. Some of these involved surprising everyday objects, such as a peppermint teabag and a jelly made with tonic water, glowing in the dark.

After lunch, in which competitors could sample some of the (perfectly safe!) glow-in-the-dark jelly, the results were announced. In third place was the Queen Elizabeth High School, second was the joint team of John Cleveland College, Hastings Academy and Redmoor Academy, and the day’s ‘Top of the Bench’ were Nottingham High School, who will go on to represent the east Midlands at the National Finals.

Year 9 member from the John Cleveland College, Hastings Academy, and Redmoor Academy team Adnan Aouad said that: 'I had fun, and enjoyed the demonstration. It has definitely inspired me about chemistry.'