Treasure from the Earth's mantle 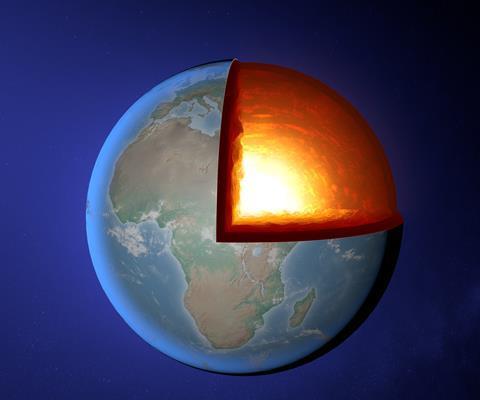 The origins of crude oil and natural gas are usually explained as the products of millions of years of geochemistry acting on the remains of ancient sea creatures. This hypothesis suggests that there are limited supplies of these fossil fuels. However, for many years now scientists have debated a controversial theory which suggests that hydrocarbons may form naturally from inorganic material deeper in the Earth's mantle. A team of scientists has shown for the first time that ethane and even heavier saturated hydrocarbons, such as propane and butane, can be made under the pressure and temperature conditions of the Earth's upper mantle, just below the crust. If correct, this theory hints at a way in which dwindling oil and gas reserves might be replenished.

Anton Kolesnikov and Alexander Goncharov of the Geophysical Laboratory, Carnegie Institution of Washington DC and Vladimir Kutcherov of the Royal Institute of Technology, Stockholm, Sweden, investigated how hydrocarbons might be synthesised from compounds deep in the Earth's mantle and their chemical stability under the high pressure and temperature conditions of the deep Earth.1 To recreate these extreme conditions in the lab the team used a 'diamond anvil cell' - a device that can put a substance under incredible pressures - to apply a pressure exceeding 20,000 times atmospheric pressure to methane and a laser heat source to raise the temperature to 700-1200°C. Under these conditions the methane forms ethane, propane, butane, molecular hydrogen, and graphite. The researchers demonstrated that under the same conditions the reverse process can also occur and ethane can be converted to methane. According to Kolesnikov and his colleagues, the apparently reversible nature of these processes suggests that saturated hydrocarbons could form spontaneously from any carbon and hydrogen present in the mantle, given enough time.

However, at least one question remains. How do these hydrocarbons formed in the mantle survive the migration from deep in the Earth's core into the crust where they could be extracted? The researchers suggest that the heat, pressure and geochemistry they would experience on such a journey would normally cause the hydrocarbons, which are essentially a reduced form of carbon, to be oxidised to carbon dioxide. Kutcherov says that now is the time to try new experimental and theoretical programs to study the fate of carbon compounds and to determine whether or not these non-fossil hydrocarbons might become a sustainable resource.