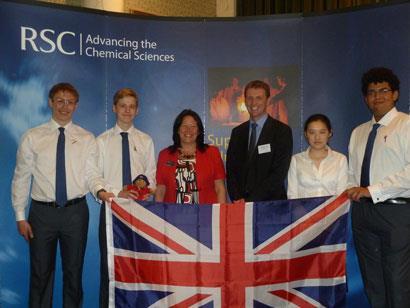 The agreement means that INEOS, who has supported the competition since 2007, will provide funding for another five years.

The announcement was made at a reception held in London to congratulate the 2012 UK winners before they left to compete in the international leg of the competition in Washington, US. Speaking at the event, Richard Longden, INEOS Group Communications Manager, said 'INEOS supports this unique event to help inspire thousands of young people across the UK to go on to take up careers in science.'

'This challenging competition provides the opportunity for talented students to use their knowledge in new and sometimes unfamiliar contexts to develop problem-solving skills that will one day benefit future generations,' he added.

Jim Iley, RSC Director of Science and Education, said 'We are delighted that INEOS has reconfirmed their commitment to the UK Chemistry Olympiad. Their support has enabled us to significantly widen participation in the competition, resulting in a 163% increase in the number of students taking part since 2007, with 55% coming from state schools this year.'

At the reception an award was also presented to Vanessa Maxwell, a teacher representing the Fairfax School in Birmingham. INEOS recognised them as the best performing state school in the 2012 competition who had not previously taken part. Maxwell said 'We decided to enter the event this year as a way of stretching our more able students.' Of the 10 students from Fairfax School who took part in round one, six received prize certificates and one was selected to take part in round two.

About the UK Chemistry Olympiad

More information about the competition and reports from previous events