A team of four students from the UK succeeds in the finals of the 40th International Chemistry Olympiad held in Budapest, Hungary, in July 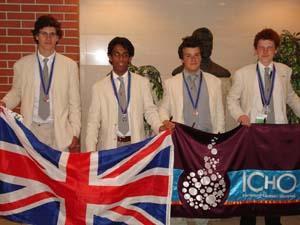 Flying the flag for the UK - this year's successful Olympiad medallists

Each of the four students in the UK's team at the finals of the 40th International Chemistry Olympiad has returned with a medal from the competition held at the Eötvös Loránd University in Budapest, Hungary in July. Competing against students from 65 countries, John Morgan of Abingdon School, Oxfordshire, and Nilpesh Patel of St Paul's School, London, led the way for the team by winning silver medals while Peter Aisher of Tonbridge School, Kent, and Sasha Kasas, another student from St Paul's School, were each awarded bronze medals.

The UK team was selected following three qualifying rounds of tests run by the Royal Society of Chemistry (RSC) and open to all schools and colleges. In the finals in Budapest the students' knowledge of chemistry and practical skills were tested in two five-hour exams.

The practical exam involved three tasks. The first was the acetylation of glucose, involving filtration using a syringe to isolate the product, followed by a kinetic study of the epimerisation of the product using thin-layer chromatography. The second task involved titration of zinc ions with EDTA (ethylenediaminetetraacetic acid). In the final task the competitors had to identify eight unknown inorganic salt solutions based on reactions between the unknowns and using only heat, water and pH paper.

The nine questions in this year's theory exam tested students' understanding of thermodynamic principles, the kinetics of thiosufate oxidation, pH calculations of polyprotic acids, crystallography of water containing dissolved methane, and the redox chemistry of thallium. The students were also challenged to determine the structure of the ischaemic stroke drug vinpocetine, which was developed in Hungary and, in honour of research into carbocations by Hungarian Nobel laureate Oláh György, there was a question about ring-opening reactions in zeolite clays. This year's Olympiad question papers with answers are available to download.

The 41st International Chemistry Olympiad in 2009 will be held in the UK at the University of Cambridge (see the 2009 competition website). Upper-sixthform students can register online for the qualifying rounds and access past Olympiad papers at the RSC's chemsoc website.

Mentoring scheme for gifted and talented

The RSC, in association with INEOS and the Royal Society, is offering state-maintained schools and colleges that have not entered the Chemistry Olympiad competition before the opportunity to nominate students to take part in a new online Olympiad mentoring scheme.

Schools and colleges eligible for the scheme can nominate up to five students, who will be at the start of their upper sixth year, or exceptionally gifted students who will be starting their post-16 studies. Participating institutions must provide a short reference for each nominated student and teachers should encourage participants to make good use of the scheme. At the end of the mentoring period, teachers will receive short reports on each of their students, detailing their progress.

For more information and to nominate students before 15 September contact Emma Woodley, assistant education manager, schools and colleges at the RSC.