Botanical miracles: chemistry of plants that changed the world 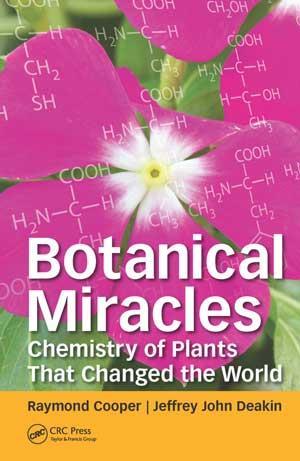 Human history is intimately linked with plants. In his seminal book Seeds of change, Henry Hobhouse described the history of five plants that profoundly influenced civilisation, giving us sugar, tea, cotton, potatoes and quinine. Several others authors have taken up the theme, Bill Laws’ Fifty plants that changed the course of history to name just one.

This book is the work of a team of two, one an experienced teacher and the other a prominent researcher. It introduces the reader to some of the successful plant-derived medicinal molecules like taxol, artemisinin and the vinca alkaloids, as well as longer-used compounds (eg quinine, morphine and nicotine). Its coverage is much wider than that, though, looking at the molecules found in a range of crops, beverages, euphorics, potions, plant dyes and pigments.

It is interlaced with an introduction to the fundamentals of organic chemistry, with all the functional groups encountered in A-level organic chemistry, and the common physical analytical techniques (NMR, IR and UV–vis spectroscopies, and mass spectrometry). For example, dyeing is introduced starting with woad and indigo, relating the structure of indole to indigo, moving on to dyeing jeans and then to synthetic compounds, exemplified by azo dyes.

There’s a good range of end-of-chapter questions. Some can be answered from within the text, but others require a wider search. Several require the reader to identify the functional groups in naturally occurring molecules not met in A-level textbooks but often encountered in exam questions.

The content of this book is well suited to A-level chemistry and introductory university courses, and would be a valuable resource to both teachers and students wanting to go beyond the specification. It fills a niche in the market – after this, a reader could be move on to books like James Hanson’s Chemistry in the garden.

Purchase Botanical miracles: chemistry of plants that changed the world from Amazon.co.uk