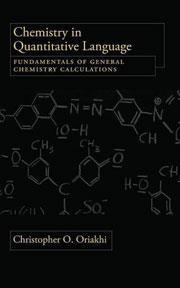 There are certain statements that will always ring alarm bells when reviewing a textbook. In this case it was being told that the one of the groups the book was aimed at was GCE O-level. The book is described as 'a study guide in problem-solving', being justified on the grounds that this is an area of chemistry that most students love to hate and one which often causes them to fail. This may be a realistic opening but it is hardly inspiring, appearing as it does in a section directed to the student.

The book does in fact read as a physical chemistry textbook, with 24 chapters on familiar chemical topics. Within each chapter, however, the emphasis is on problem-solving, as might be expected. There are several worked examples, together with end-of-chapter problems for students to attempt, with brief answers at the back of the book.

Irritatingly, the author doesn't believe in the usual mathematical conventions expounded in physical chemistry. On meeting the gas constant, R, given as '8.314 J/K-mol' for the first time, I thought it must be a misprint. However, this turns out not to be the case because there are several more occurrences of R and other quantities that have units written in this way.

In other places the writing is simply sloppy. For example, we are told that 13 carbon atoms have a mass of 156.0 g. Chapter five uses the term number of moles frequently while only mentioning the amount of substance in passing in the introductory paragraph. When we reach the topic of kinetics the author moves seamlessly back and forward between units of mol/L and mol for concentration. Graphs are given with the x axis labelled as Time (min) in one case, followed by Time,min in another. Unfortunately the correct form, Time/min doesn't feature.

This book represents a sound concept but it frequently lacks the attention to detail required in this subject.