From atoms to molecules

Studies in the history of chemistry from the 19th century 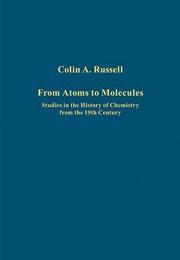 Colin Russell has long been one of our most distinguished historians of chemistry. He combines deep scholarship with a highly readable style, and has contributed hugely to studies in the history of chemistry in what could be called the 'early modern age', ie the time at which chemistry became recognisable to today's practitioners, with the development of the concept of valency, and of the notion of structure in organic chemistry.

This book consists of reprints of 18 of Russell's papers and articles. They range from a 1959 paper originally published in Annals of Science, and based on Russell's MSc thesis, to a paper entitled Advances in organic chemistry over the last 100 years, first published in Annual Reports, Section B in 2005. They thus cover almost 50 years of Russell's contributions to the history of chemistry.

The book is well presented, with all articles in their original font, and with the original paragraph and figure numbering. As such, it represents an important collection of work on the history of organic chemistry since about 1850, with an emphasis on the developments in the UK. I am not sure how much this volume will appeal to today's student of chemistry, but they should be encouraged to dip into it to gain some insight into how we got to where we are today.