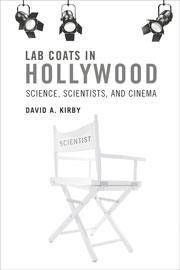 The synergy and history of the scientific consultant and film maker is perfectly presented in this well researched, and excellently written, superlative book by David Kirby.

The book is presented from both the director’s and the consultant’s point of view. It discusses the film maker’s battle to add value and authenticity to science-based films by incorporating as much verisimilitude as their budget can handle, whilst at the same time it analyses the science consultant’s struggle to get their values and theories across to the film makers against those very constraints.

For the consultant, balancing their credibility against the artistic freedom of the film maker can result in positive and negative outcomes and this is given in ample evidence throughout the book. Both director and scientific consultant will ultimately aim to add value to the film without compromising the budget, storytelling or science.

The book shows that there are some interesting compromises to be made during the film making process. Although the director will most likely have the final say in the manufacture and presentation of a film, the audience will eventually determine whether the scientific content is authentic and believable at the box office. This will ultimately be a result of the determination and influencing skills of the scientific consultant.

Lab coats in Hollywood is an excellently presented work and a must for anyone interested in the interaction of film makers and scientists. It should also appeal to those interested in using media such as film to deliver key scientific content to a larger non-scientific audience.