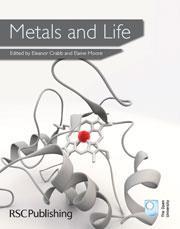 Four chemical elements (C, H, N, O) make up 99 per cent of the human body; this book is concerned with the metallic elements that make up much of the remaining one per cent. Written both as a text for the Open University course S347 Metals and life, the book also to serve as a stand-alone volume and it complements the book Concepts in transition metal chemistry (reviewed in Educ. Chem., 2010, 47 (5), 159).

After an introductory chapter, successive chapters deal with ligands; metal uptake; metal transport; metal storage; biomineralisation; the role of metalloproteins in biological processes and some key biological processes. In addition to this, an online chapter covers metals in medicine, where it links with other books in the RSC ebook collection, as well as a goodly number of reviews from the literature, most of which, however, are only available to OU students. This chapter includes valuable sections on platinum anti-cancer drugs and their means of action, gadolinium in MRI, and radiopharmaceuticals (especially Tc). End of chapter questions are also to be found on the companion website.

The book reminds us of the importance of iron to living systems, so that the chapter on metal uptake is substantially devoted to the problem of iron uptake (important to humans and bacteria alike) and the role of the siderophores in this. Iron transport round the body using transferrin is fully considered, as is its storage in ferritin. Later, the role of ferredoxins and cytochromes in electron transfer is covered, and there is a large section on dioxygen binding and transport. The book is very well illustrated, but perhaps a picture of the Bohr effect curve would have illuminated its description in words.

Iron is not the only metal in the body, though and other metals are not forgotten. We are reminded of the increasingly recognised importance of zinc, and blue copper proteins and vitamin B12 have their place of honour. Much of chapter 4 is concerned with Group I and II metals and the transport of these ions across membranes. The literature seems well up to date and I noticed several 2009 references. Though primarily a university text, there is much here that is also valuable to British A-level students and their teachers. Thoroughly recommended.