The Proteins building set may not be as versatile as Lego, but it can be used to build some magnificent and real structures. It is certainly more than just a toy, and by elucidating the importance of shape in proteins it would also sit well in schools 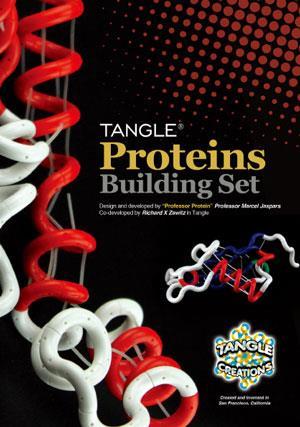 On my first day at the Royal Society of Chemistry I was surprised to see a box of toys sitting on the Chemistry World editor's desk. Gifts for children? Executive stress relief? Maybe I've joined one of those funky dotcom-style offices where people just play with toys for 'inspiration'?

The truth, I soon discovered, is a bit of all three - the main toy in the box was the Proteins building set, which describes itself as 'the most accurate protein building set' with which you can 'build and learn about proteins'. It was designed and developed by Marcel Jaspars of the University of Aberdeen, working with Richard Zawitz of Californian toy maker, Tangle.

Jaspars had suggested Chemistry World might like to have a sample set, so I decided to follow his advice - build a protein and see what I learn.

The Protein building set itself consists of quarter-circle curved plastic tubes, designed to clip into one another like a very niche Lego set. These can be combined into circles, helices, waves or amorphous wibbles, and structures can be supported using thin clear plastic struts, to stop your proteins 'denaturing'.

It's undeniably fun to play with and to explore the structures one can create – but by just playing I don't feel like I'm learning anything about proteins. Perhaps it's time to look at the booklet that came with the set.

This is where it gets educational. There's a lovely overview of the roles and structures of proteins, as well as an introduction to the use of models in science and how a Tangle toy inspired Jaspars to design this kit. It explains how the pieces represent simplified amino acid residues, with the holes for struts placed in approximately the right place to show hydrogen bonding of C=O and N-H, even acknowledging and detailing the simplifications made to allow this. Then we get into the real meat – step by step instructions on how to build the actual structures of real proteins: The third IgG-binding domain from Streptococcal protein G; Ubiquitin and ω-Conotoxin MVIIA.

Building the IgG binding site took about half an hour - the instructions are easy to follow and include an accessible explanation of its role in disease. Constructing the protein involves learning the structure of β-sheets and an α-helix, but the real educational value comes from the dawning realisation that it's the secondary and tertiary folding and cross bonding that gives the protein its structure, not simply the sequence of parts.

The Protein building set may not be as versatile as Lego, but it can be used to build some magnificent and real structures; Jaspars suggests visiting the Protein Data Bank for inspiration. With that in mind, it could easily find a home in the toy box waiting for a rainy afternoon, a biochemical 3D jigsaw puzzle. But it is certainly more than just a toy, and by elucidating the importance of shape in proteins it would also sit well in schools next to the molymod.