Carbon in the pipeline

Carbon nanotubes (CNTs) - rolled up sheets of graphite around 90,000 times thinner than human hair - have witnessed a recent explosion of interest among chemists and physicists worldwide. These versatile materials are being used in applications ranging from sports equipment, through drug delivery and cancer treatment, to bulletproof vests and microscopic radios. 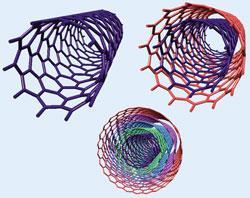 The current interest in carbon nanotubes (CNTs) can be traced back to the discovery of the football-shaped molecule C60 (buckminster-fullerene or 'buckyball') in 1985 by Harry Kroto at the University of Sussex and Rick Smalley of Rice University, Texas. Six years later, Japanese chemist Sumio Iijima was trying to find out more about the structure of buckyballs, and was making them by vaporising carbon with a high voltage (an arc discharge). Unexpectedly, he found that he had also made similar but elongated, tube-like structures that had a 'cap' at each end comprising half a buckyball.

According to Peter Harris, professor of microscopy at Reading University, who has spent many years studying CNTs, 'tubes of carbon had been known before this time, but these never generated much interest because they tended to be badly formed and bent, and not perceived as being of much use.' In contrast Iijima made perfect, atomically regular tubes, with a diameter of the order of 1nm (10-9 m). These CNTs were soon shown to have amazing properties. They were around 50 times stiffer and stronger than steel, but a quarter of the density and therefore lightweight. Unlike other stiff materials, CNTs are not brittle, and some exhibited electrical conductivity on par with copper, while others were found to be semiconducting.

Carbon - on a roll

'What leads to these properties,' explains Harris, 'is their structure. 'The single graphite sheet - known as graphene - can be rolled up in different arrangements, each giving a regular, repeating bond structure but with a different symmetry. It is also possible for several layers to wrap around each other, producing concentric tubes (multi-walled CNTs). The degree of symmetry in the nanotube also determines how strong or electrically conductive it is.

'Most materials have defects in their structure which weakens them,' says Harris. 'However, the strong C-C bond structure in carbon nanotubes can be almost defect-free.'

The drawback is that pure CNTs are difficult to make in large quantities and therefore cost considerably more than gold. To use only carbon nanotubes for a car chassis or plane fuselage would therefore be very expensive.

To take advantage of these materials, scientists make 'composites', combining smaller amounts of nanotubes with polymers. Composites made of just 10 per cent CNTs can dramatically increase the strength of the material. Such composites have already been used in the manufacture of expensive sports equipment - many tennis rackets, bike frames and baseball bats now boast 'carbon nanotube technology'.

Whether a CNT is conducting (metallic) or semiconducting will depend on its symmetry, which is determined by the alignment of the graphene sheet. Carbon nanotubes could potentially be used to make computer components many times smaller than those currently used in electronics which are based on silicon. (The smallest silicon device is around 50 nm.) However, scientists haven't yet found a way to grow CNTs with a defined symmetry which would give them metallic or semiconducting carbon nanotubes - they always get a random mix of structures. Moreover, while scientists have shown that they can build individual transistors, none has been able to make the thousands needed for a workable device in the computer industry. Harris estimates it could be 10 years or more before we see CNT-based electronic components on the market.

Bulletproof vests are currently made with Kevlar, a polyamide which spreads the impact force of a bullet over a large area and protects the wearer. While Kevlar vests stop bullets getting through to the body, the impact can still hurt and can even cause bruising of internal organs. L. Zhang and co-workers at the University of Sydney, Australia, have shown by computer simulation methods that bullets 'bounce off 'carbon nanotubes. The researchers suggest that armour made from CNTs woven into yarns, bound together by van der Waals' forces, would completely protect the wearer without any bruising.

A team of scientists led by Steve Curley at the University of Texas, US, has found a way to destroy certain cancer tumours with heat generated from CNTs. In preclinical trials in rabbits, the scientists injected the nanotubes directly into liver tumours and fired harmless radio-frequency radiation at the area. The radiation caused the CNTs to heat up and thermally destroy the tumour from the inside out - without side effects. Injecting the tubes into some tumours, however, is not possible so the chemists are currently working to bind the CNTs to antibodies and effectively make 'magic bullets'. By joining the CNT with a specific antibody that only bonds to cancer cells, they should be able to target specific cancer cells while leaving healthy cells undamaged.

At Brown University, US, chemists are studying how CNT implants help bone cells grow faster on a titanium bone implant, and also aid in monitoring the healing process. Tom Webster and his team grew CNTs on the titanium by first etching microscopic pits into its surface with acid, placing a cobalt catalyst into the pits, and heating the material to 700°C under a methane atmosphere. They found that bone cells grew twice as fast with CNT implants than with just titanium. The nanotubes have an additional benefit - their resistance changes as cells grow on them, making it possible for the researchers to monitor cell growth. This information could allow doctors to see how the bone is healing.

A surprising but fascinating application for CNTs could be in the manufacture of radios. Recently scientists in California showed that a single nanotube, tuned to the right size, can pick up radio waves and convert them into sound - all you need to do is plug a speaker onto the other end. The CNT's resistance changes when the radio waves make it vibrate at different frequencies, which according to the researchers, decodes ('demodulates') the radio signal and allows you to play the sound back through a speaker.

These diverse uses of CNTs, along with current applications like composite materials, show that nanotubes have great potential to be the wonder material for the 21st century. As the price of production drops and scientists learn more about how CNTs grow, we will see more examples of stronger, lighter, more efficient consumer goods bearing the label 'carbon nanotube technology'.

The properties of carbon nanotubes are determined by how the graphene sheet rolls up. In highly symmetric tubes like the 'armchair' variety, the electron orbitals of the carbon atoms overlap strongly and electrons flow very easily; these nanotubes conduct like metals. Twisted 'chiral' tubes have low symmetry, resulting in weak orbital overlap between carbon atoms which makes it difficult for electrons to flow, and are only semiconducting.