Firefighter clothing, spacecraft insulation, and coatings for deep-buried detectors could all benefit from a novel thermally-insulating material that has been developed by scientists in China and the US. The team has demonstrated that its ceramic aerogel exhibits superior thermal insulation over the materials currently used for these applications.

Ceramic aerogels are ultra-porous materials, comprised of thin layers of ceramic separating tiny air pockets. A typical ceramic aerogel is 99% air. The ceramic barriers hinder heat transfer by convection between the air bubbles, meaning these materials can serve as heat insulators. There is a problem however – ceramics are typically brittle, which can lead to catastrophic failure when the materials are placed under stress.

To overcome this, the scientists designed a zirconium(IV) silicate nanofibrous aerogel with a zigzag architecture that is dramatically more mechanically-stable than previously-reported ceramic aerogels. 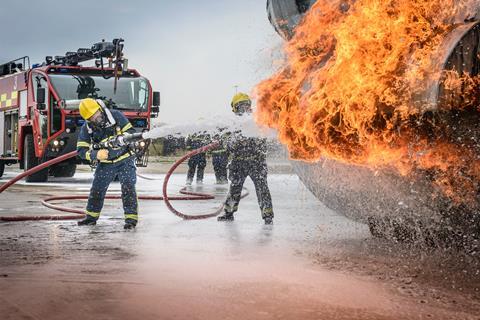 The scientists used a multi-step manufacturing method. First, they used an electrospinning method to spin a zirconium–silicon starting material into a candyfloss-like ceramic felt. Then, they mechanically folded this felt into a zigzag pattern. Finally, they sintered the zigzag construction at 1100°C.

The resulting ceramic aerogel construction absorbs mechanical strain, preventing it from fracturing under stress. It doesn’t do this by allowing the fibres within the material to glide past each other when strained, as one might expect. Instead, the fibres buckle under stress, with the expansion of the fibres running in one direction being countered by the contraction of fibres running in the other direction. This design means the structure is highly mechanically stable.

Another aspect of the material’s design means it can block thermal radiation in addition to thermal convection. This is especially useful in high temperature environments, as above 500°C thermal radiation dominates heat transfer. This radiation-blocking property is due to carbon species intentionally trapped in the fibres during the manufacturing process. These dark specks absorb thermal radiation and therefore prevent it from travelling through the material.

Turning the heat up

The researchers conducted several tests on their material. In one, they wrapped aeroplane engine fuel tubes in various insulators before heating them with a butane blowtorch for five minutes. The tube insulated with a commercial polyimide foam insulator hit 267°C, the one protected by a conventional silica fibrous aerogel reached 159°C, while the new ceramic aerogel kept the temperature below 33°C.

Shenqiang Ren of the University of Buffalo in the US, who was not involved with this research, describes the work as an ‘important contribution’ to the field of ceramic aerogels for use in extremely hot conditions. ‘The manufacturing process is [also] relatively straightforward and potentially scalable,’ Ren says, adding that the design ‘could inspire the development of next-generation extreme materials’.

This article is adapted from Tim Wogan’s in Chemistry World.

Download this article and a one-slide summary with questions to use with your 14–16 students when teaching composite materials: rsc.li/3SunSvk