Study aims to decipher ingredients for metallurgy recipes published in the Kaogong ji, a Chinese technical encyclopaedia written around 300BC

Bronze was first made in China around 1700BC and this metal became an important material in Imperial China. Its uses ranged from weapons, to household objects, to ritual vessels. A new study challenges previous assumptions about how these early bronze makers performed their craft.

Bronze is a metal alloy composed of copper and tin, and the long-standing theory is that the ancient Chinese mined natural deposits of both ores and then heated them to a sufficiently high temperature that they mixed and formed bronze. New research by Ruiliang Liu, a curator at the British Museum, and Mark Pollard, an archaeologist at the University of Oxford, suggests, however, an additional and previously undiscovered, step in the early Chinese bronze production process. 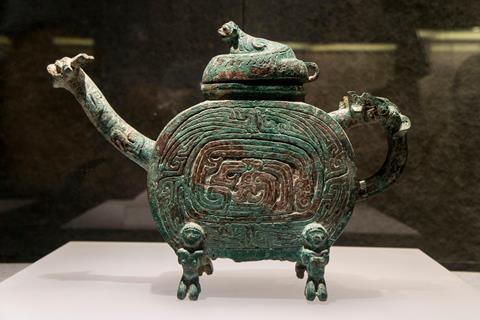 Much of what is known about early Chinese bronze production comes from an ancient technical encyclopaedia called Kaogong ji. This text was written in western China around 2500 years ago, possibly for officials who supervised artisans. The Kaogong ji contains six bronze recipes, each with two ingredients: Jin and Xi. The recipes give these two ingredients in different proportions for different products – including a bowl, sword or mirror. These are the oldest chemical formulas known to have been written down in China.

Jin and Xi have long been assumed to be pure copper and tin, but if that’s true, then the bronze objects from this era should contain a higher proportion of tin than they do. Additionally, ancient Chinese bronze contains about 10% lead, which is a much higher proportion than expected from contamination alone. To try and understand these discrepancies, Ruiliang and Mark studied the chemical composition of various ancient Chinese bronze coins held at the British Museum.

The duo’s findings led them to conclude that ancient Chinese bronze wasn’t made from simply mixing copper and tin. Instead, they suggest, Jin may have been an alloy of copper, tin and lead, while Xi may have been an alloy of lead and copper. These findings, published in the journal Antiquity, suggest that the making of these intermediate alloys was a hidden step in early Chinese metallurgy.

This article is is adapted from Tom Metcalfe’s in Chemistry World.

Download this article and a one-slide summary with questions to use with your 14–16 students when teaching alloys: rsc.li/3UMyExV