A starter slide to use with 14–16 year old students to provide context for reducing global warming in the atmosphere topic.

A starter slide to use with your 14–16 students to provide a new context for their study of atmosphere and environment: rsc.li/2Hr4q2c 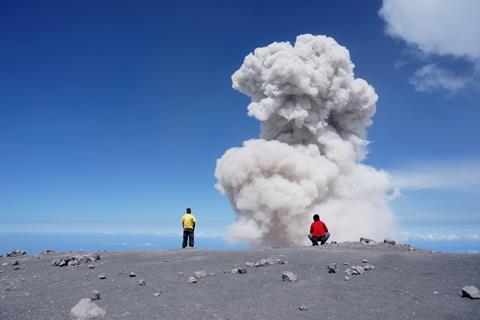 Could volcanoes be the key to drawing out the excess carbon dioxide from our atmosphere?

Dumping volcanic ash into the ocean could boost the rate at which carbon is drawn out of the atmosphere and sequestered in marine sediments, researchers from the UK and Germany have proposed.

The process, they say, would be simple to implement, requires no changes to land usage – unlike, for example, reforestation programmes – and is significantly cheaper than other geoengineering approaches.

The deposition of erupted volcanic material supplies nutrients for marine algae. It increases the rate at which carbon dioxide is taken up by algae to help create their calcium carbonate exoskeletons – many of which sink to the sea floor and are buried. The ash can also become physically associated with plankton debris, increasing sinking rates. It also inhibits the oxidisation of carbon back to carbon dioxide at the sea floor by absorbing dissolved oxygen from water in pores in the sediments, and locking carbon up as carbonates.

There is a concern, however, that volcanic ash could harm marine ecosystems. Also, marine dumping in general is currently banned under an international convention.

Use the starter slide with your 14–16 classes to give them a new context for their studies of global warming in the atmosphere topic and show them new ways of fighting climate change.