The webs of orb-weaving spiders trap microplastics from the air, meaning they could be used as a fast and inexpensive tool for monitoring urban air pollution

Examining spiderwebs is an inexpensive and simple way to screen for high levels of microplastics in city air, according to researchers at the University of Oldenburg in Germany. Microplastics are tiny plastic fragments smaller than 5 mm in diameter. There are numerous sources releasing these into the urban air, including vehicles, clothing and packaging. The potential impacts of exposure to microplastics on human health are a growing concern.

Spiders build their webs to trap flies and mosquitoes, but it has long been known that these webs also capture a wide range of heavy metals from the air. Previous studies have also shown that webs are effective tools for monitoring airborne metal pollution.

Nobody has examined these natural structures for microplastics until now, explained geochemist Barbara Scholz-Böttcher, who headed the study. She and her team set out to determine whether microplastics could be detected in the webs of the extremely common orb-weaving spiders. And, if so, whether the concentration and type of plastics captured showed any patterns.

First, the scientists collected spiderwebs from near the top of semi-covered bus stops. They selected bus stop locations with varying amounts of traffic in the city of Oldenburg. Next, the team took the webs back to the lab and analysed the plastic fragments on them using a gas chromatograph coupled to a mass spectrometer. 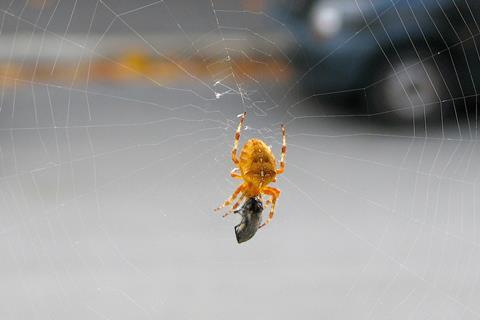 Bugs for biomonitoring. Spiderwebs offer a snapshot into the airborne plastic that’s present in our cities

The scientists found that all the spiderwebs they collected had captured microplastics, and in some cases the plastic content accounted for a tenth of the total weight of the web. Almost 90% of the plastic detected was one of three types: a plastic known to come from car tyres; poly(ethylene terephthalate) (PET); or poly(chloroethene) (PVC).

The team found that the proportion of car tyre debris in the webs varied greatly depending on the busyness of the road they were spun near. The origin of the other two plastics was less obvious. PET is widely used in bottles and packaging, but it is also the most used artificial textile fibre. Although PVC is used extensively in the construction sector, the data suggested that road marking abrasion may be the dominant source here, instead.

Barbara and her team concluded that examining spiderwebs is a fast and inexpensive biomonitoring approach that can be used to screen for urban hot spots of microplastics pollution that require further detailed study.

This article is is adapted from Rebecca Träger’s in Chemistry World.

Download this article and a one-slide summary with questions to use with your 14–16 students when teaching life cycle assessment and recycling: rsc.li/3JKPSXo