News of the protective properties created from adding calcium to magnesium

A starter slide to give 14–16-year-old students a new context for their study of alloys and corrosion. 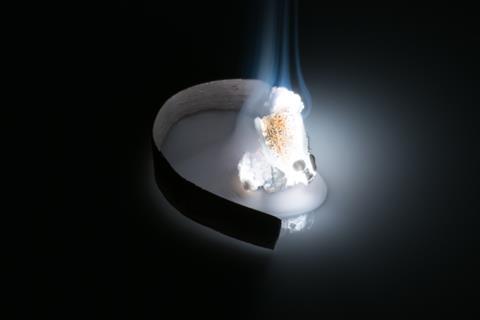 Due to its low weight, high strength, and abundance in the Earth’s crust, magnesium is widely used in automotive, aerospace, electronic, biomedical and energy-storage applications. Magnesium’s weight makes it attractive from a sustainable perspective – it is significantly lighter than aluminium, so replacing aluminium with stainless magnesium in cars and aeroplanes could reduce fuel consumption and carbon dioxide emissions. However, using magnesium on an industrial scale is limited because it corrodes in aqueous environments.

Scientists have created an alloy with an exceptionally low corrosion rate by alloying pure magnesium with tiny amounts of calcium. Pure magnesium and pure calcium were melted at high temperatures in a steel crucible. The melt was then poured into a mould and cooled.

By using only tiny amounts of calcium, the new alloy retains the properties of pure magnesium. However, the alloy can resist corrosion because the calcium allows the development of a protective surface film and stabilises impurities (such as iron and silicon) within the alloy. The addition of calcium also broadens the applications of magnesium alloys as an implant material, since calcium is harmless to the human body.