A stench from the French

Phillip Broadwith investigates a thiol that made the news

A cloud of sulfurous gas emanating from a factory in France made the news in January. It spread northwards on the wind, covering vast swathes of southern England, and southwards to the French capital, Paris. The gas came from the specialist lubricants and paints firm Lubrizol, in Rouen.

'Le pong' - as some newspaper editors dubbed it - caused considerable disruption and discomfort. A French football match was postponed and lots of people complained about the smell. 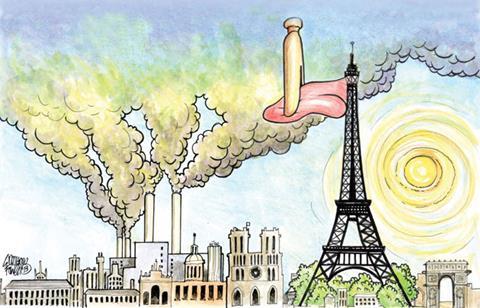 However, the biggest disruption was caused by the specific nature of the gas and an unfortunate coincidence. Lubrizol said that the gas was 'mercaptan'. Chemically speaking, mercaptans are a class of compounds containing an S-H group. They are the sulfur analogues of alcohols, also known as thiols. These compounds, along with related thioethers like dimethylsulfide, are also characterised by their extremely noxious odours (reminiscent of rotting eggs, overcooked cabbage, sweat and a host of other foul aromas) at anything above the lowest of concentrations.

In this case, it appears that the specific compound involved was methylmercaptan, or methanethiol. Unfortunately, this is also a significant component of the mix of compounds added to the natural gas (methane) supplied to homes all over the UK, to enable us to detect gas leaks more easily. When people say 'I can smell gas', they usually mean 'I can smell thiols', since methane itself is odourless.

On the plus side, one of the reasons methanethiol was chosen as a gas additive in the first place is its low toxicity, coupled with our ability to detect its odour at vanishingly low concentrations. While it may be unpleasant, authorities were quick to reassure the public that there was no threat to public health.

But what caused the smell in the first place? Lubrizol said that the leak was caused by 'instability with a batch of one of [its] products'. That batch of product is decomposing, releasing the thiol.

In the lab, waste thiols are often oxidised to eliminate their odours, but clearing up industrial quantities of a degrading speciality chemical product may need to be a bit more subtle than just dumping it in a big bucket of bleach. However, that does appear to be exactly what happened in the first phase of the clean-up operation, according to the French ministry of the interior.

Those who were in an affected area could be thankful that the human brain has an in-built mechanism for 'turning off' its response to bad smells after a certain amount of time. Something I was very thankful for when I worked at a bench next to a big (thankfully ventilated) cupboard full of a variety of stinky, sulfurous reagents.