What was to blame when iPhones stopped working in a hospital?

Erik Wooldridge was perplexed. The phone at his IT helpdesk was ringing off the hook about a bunch of Apple devices that had – almost simultaneously – stopped working. All 40 devices had been in the same building that day, at the Morris Hospital near Chicago, US. And all these iPhones, iPads and Apple Watches were now as dead as a dodo.

The finger of blame was immediately pointed towards a new MRI (magnetic resonance imaging) scanner being installed in the building that day. Did it give off an erroneous electromagnetic pulse that fried nearby electronics, pondered Erik? This explanation made little sense, as Android devices and everything else electronic in the hospital was working as normal. As was an older iPhone model: iPhone 5. So, Eric reached out to an online community of fellow techies on Reddit to ask for help.

A bunch of Apple devices that had – almost simultaneously – stopped working

Redditors helped Erik figure out that the new MRI was indeed to blame, but not in the way it was first thought. It transpired that during its set-up, approximately 120 litres of liquid helium (intended to keep the magnet cold) had been accidently vented into the room. This gas then travelled with the rest of the MRI room’s air around the building. It went undetected because the level was so low; no one became ill or started speaking with a hilarious squeaky voice. In fact only one thing appears to have noticed – the Apple devices.

One of Erik’s redditors wasn’t surprised that helium did this. Nor would Apple have been if he’d asked them. It’s a well-known issue inside the tech giant, and even features in their iPhone user guide. But who actually reads those? ‘Exposing iPhone to … evaporating liquified gasses such as helium may damage or impair iPhone functionality,’ it states.

By why? The redditor explained that too. All electronics contain a timing device. Typically, these are vibrating crystals of piezoelectric materials known as quartz oscillators. In the quest to produce ever smaller devices, Apple and others have recently switched to microelectromechanical system (MEMS) oscillators. These are housed inside airtight chambers, to stop gas molecules interrupting their vibrations. The seal on the MEMS resonator in Apple devices likely leaks in helium-rich atmospheres rendering them non-functional, the redditor wrote. 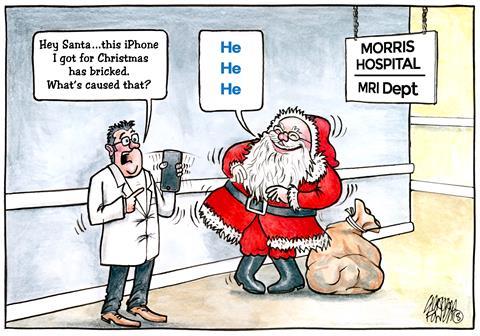 Erik decided to test this theory out, putting an iPhone 8 Plus in a sealed bag and filling it with helium. After eight minutes and 20 seconds the phone locked up. It recovered a few days later. As did nearly all the other Apple devices that were in the hospital that fateful day.

Lessons we can learn from this? Keep Apple devices away from kids’ party balloons and – maybe more usefully – that the collective knowledge of thousands of users on Reddit can make it an excellent place to seek help in peculiar situations!