On paper, electric cars sound so good; cheap to ‘fuel’ and packed with green credentials. But there is one major downside, you can’t get very far.

For example, the Nissan Leaf – one of the most popular electric cars – has a maximum range of 155 miles. This plummets if you don’t drive at a ‘leisurely speed’ or use heating or air con. To ‘refuel’ the car needs plugging in. A rapid charger – now installed in many motorway service stations, supermarkets and city car parks – takes 30 minutes to get to 80% of full charge. Plug it in to a standard socket at home and a full charge takes nearly 12 hours. In short: they don’t suit everyone’s needs.

Before electric car use can really take off, they need to match or even exceed the range of petrol and diesel-fuelled cars. And this means their batteries need to be able to store more energy. 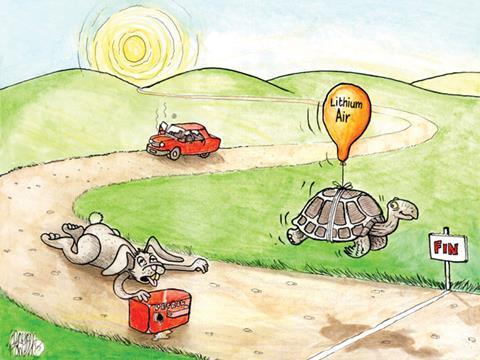 Electric cars currently use lithium ion batteries, the same type used in many consumer electronics such as laptops and mobile phones. But many research groups have been exploring lithium air batteries as an alternative, believing that they should be able to pack in more energy per kilogram of battery.

Lithium air batteries, also called breathing batteries, are designed to produce energy when lithium reacts with the oxygen in air. Previous attempts at making these batteries have been hindered by electrode clogging particles that form when the batteries discharge and also undesirable side reactions that cause damage to the batteries and limit their lifetime.

Chemist Clare Grey and her team at Cambridge have recently revealed a new prototype lithium air battery that conquers these two issues. Lithium air batteries normally have a lithium metal negative electrode (anode), a non-aqueous electrolyte and a positive electrode (cathode) that work together to make lithium peroxide when the battery discharges.

Clare’s team have used an additive, lithium iodide, to change the battery’s chemistry meaning lithium hydroxide crystals form at the cathode rather than lithium peroxide. When the battery is recharged the lithium hydroxide fully dissolves. By contrast, lithium peroxide is hard to remove during the recharging process. Side reactions were also less of an issue. The team also used a graphene cathode with larger pores, which clogs less easily.

The prototype batteries have been charged and recharged more than 2000 times with little damage. But they are still a long way from hitting the market. Clare has estimated commercialisation will take at least 10 years, with many technical issues left to iron out. Even so, her team’s research is being viewed as a breath of fresh air among the rechargeable battery research community.