Every breath you take

What’s polluting the air inside our homes? Nina Notman investigates

During our lifetime we each breathe about 250 million litres of air, according to a recent report from the Royal College of Physicians. And the ‘non-optional extras’ we are breathing in with that air are of growing concern. While attempts to tackle outdoor air pollution are ramping up (although this is still a political hot potato) there are few regulatory controls on indoor air pollution.

In 2012, indoor air pollution is estimated to have caused or contributed to 99,000 deaths in Europe. To put this figure in some sort of context: 27,700 people were killed in road traffic incidents in the EU in the same year.

Worryingly, but not unsurprising, the report says that the drive to create greener homes with tighter ventilation is making the situation worse. Indoor pollutants can’t escape from our buildings in the way they once did. 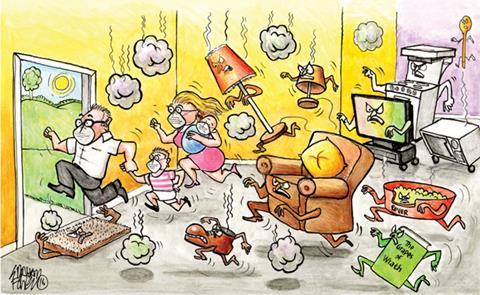 Public awareness of the negative health effects of cigarette smoke, carbon monoxide-emitting faulty gas or oil heaters and boilers, asbestos and natural radioactive radon gas on our indoor air quality is now fairly high. But there are many, many less widely known sources of concern.

Key indoor pollutants highlighted in the report include formaldehyde from furniture and furnishings, PAHs (polycyclic aromatic hydrocarbons) from cooking, VOCs (volatile organic compounds) from a wide range of household and personal care products, ozone from electrical appliances and phthalates from plastic materials. Biological materials, such as house dust mites, mould and animal dander, are also cited.

‘Additional compounds may be generated through chemical reactions between certain pollutants in indoor air – for example, between ozone and VOCs – forming complex new organic substances,’ the report states.

The possible health consequences of being exposed to indoor air pollutants include asthma, respiratory irritation, allergies, effects on the heart and cancer. They are also thought to cause a condition called sick building syndrome, where sufferers have symptoms such as nausea, headaches and poor concentration but no specific cause can be found.

The main purpose of the report is a call for further research to be done to quantify the relationship between indoor air pollutants and public health. This research could then help direct appropriate policy changes.

Indoor smoking bans (now in place in 92 countries) are highlighted in the report as an example of health gains being achieved through the use of policy to reduce exposure to indoor pollutants. Many studies have, according to the report, found decreases in acute coronary events following the introduction of indoor smoking bans. Decreases in hospital admissions for childhood asthma have also been recorded.

Once we get a better handle on the effect of other indoor air pollutants on health, estimates of the financial burden caused by these will become possible. This may help push policymakers towards taking action as the figures are unlikely to be insignificant. Air pollution as a whole is estimated to cost the UK economy more than £20 billion per year and the EU €240 billion annually.