In this issue: french fries 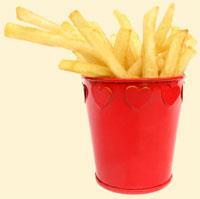 Why do they taste so good?

It is down to the Maillard reaction.

In 1912, Louis-Camille Maillard reported to the French Academy that when he heated solutions of amino-acids and sugars together, a yellow-brown colour was formed. The Maillard reaction occurs between an amino acid and a reducing sugar; apart from brown colours, small, volatile, molecules responsible for odours and flavours are also formed.

For a start, pyrazines - particularly 2,3-diethyl-5-methylpyrazine and 2-ethyl-3,5-dimethylpyrazine. These cause earthy, nutty, smells. There are various sorts of aldehydes: 2-methylpropanal, 2-methylbutanal and 3-methylbutanal contribute a malty, sweaty, character, whilst a deep-fried, fatty character is contributed by (E,E)-2,4-decadienal, one of a number of unsaturated aldehydes formed by oxidation of lipids. Methional (3-(methylthio)propionaldehyde) originates in the amino acid methionine, and is also the main flavour molecule in baked potatoes.  Furaneol contributes a sweet, caramel, component to the mixture, whilst methanethiol, CH3SH, gives a cabbage note.

And the best way to cook them?

According to the great French molecular gastronomist, Hervé This, they should be cooked in oil at 180°C; water evaporates creating a dry outer layer to which starch granules are sealed. After cooking they should be wiped immediately using a paper towel, before oil can be sucked into the chip.

Why do McDonald's FRIES taste different?

Until 1990, McDonald's cooked their fries in a mixture that was about 7 per cent cottonseed oil and 93 per cent beef tallow. They switched to pure vegetable oil in a bid to lower the cholesterol content, but needed to add chemicals to retain the characteristic taste. Tests on potatoes that had been deep-fried in beef tallow-hydrogenated vegetable oil mixtures suggest that the molecules responsible for this flavour are carboxylic acids including butanoic, 2- and 3- methylbutanoic, heptanoic, 4-methyloctanoic, and nonanoic acids (as well as some unsaturated acids derived from linoleic acid, including Z-4-heptenoic acid and E-2-octenoic acid).

One last thing ... Why do Americans call them "French fries"?

No one is sure. The earliest reference to them is reportedly from late 17th century Belgium; if that's true, they are a great Belgian invention, along with Tintin and Belgian chocolates.