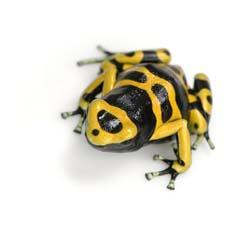 More on those poison dart frogs from the rainforests?

No, these frogs are from the Australian outback. The poison dart frogs from the rainforests of Central and South America produce molecules - eg epibatidine, batrachotoxin, pumiliotoxins - that are a defence against predators. The Australian frogs use different chemicals to defend against bacterial attack.

What is different about them?

In the past 15 years scientists, led by Professor John H. Bowie at the University of Adelaide, have isolated around 150 different peptides (compounds made up of amino acids linked together by peptide bonds) from Australian frogs. They have found that these chemicals, produced from glands in the skin of the frogs, have important antimicrobial and anticancer properties. The frogs produce these compounds to protect themselves from being infected by bacteria, viruses and fungi. A molecule with 25 amino acids joined together, known as caerin 1.1, is secreted by several frogs, including Litoria splendida, the magnificent tree frog. Caerin 1.1 is active against the bacteria Staphylococcus aureus, usually associated with pimples and boils, and Herpes simplex, the virus which causes cold sores.

How do these defence chemicals work?

It looks as if these frog peptides form a helix that binds to the surface of the bacterial (or viral) membrane, disrupting the way the membrane works, and leading to lysis (breakdown) of the cell wall and death of the cell.

Working in collaboration with scientists at Vanderbilt University in Tennessee, led by Professor Scott Van-Compernolle, Bowie and his colleagues have found that some of these peptides, including caerin 1.1, inhibit HIV infection of human T-cells (disease-fighting white cells). The treatment leaves the human cells unaffected and seems to prevent transmission of the HIV virus between cells.

How could this be useful?

The researchers showed that infected cells could be successfully treated with the frog peptide up to eight hours after they had been exposed to HIV. One possibility might be to incorporate molecules like caerin 1.1 in a prophylactic cream for people exposed to HIV.