Surely there's nothing new about ginger?

Scientists working at Royal Holloway College, London and at the University of York have found out that ginger can be used to bait traps to attract stag beetles.1

Why on earth would they do that?

The stag beetle is the biggest British beetle, with the male having characteristic 'antlers'. It has become scarce so the researchers wanted to find a way to monitor the size of its populations.

No, the attractant is a hydrocarbon called a -copaene, also found in small quantities in several fruit, such as orange and mango, as well as many tropical trees. This compound also attracts some other insect species, including the Mediterranean fruit fly, the Banana weevil and the European oak bark beetle. But it is not spicy. 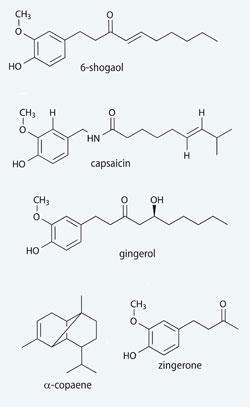 So what makes ginger hot?

The chemical we normally encounter is zingerone, found in cooked ginger. Fresh ginger contains gingerol which when dried forms a third type of hot compound, 6-shogaol. Of the three, zingerone is the hottest, but it is only about one thousandth as hot as capsaicin, the molecule which gives chilli peppers their searing heat.

So these are hot molecules but do not attract insects?

Well, zingerone does both, as it attracts several insect types. The wild orchid Bulbophyllum patens  (found in Malaysian rain forests) uses zingerone to attract male fruit flies of several species, trapping them briefly between its column and a hinged see-saw lip. As the fly feeds on the zingerone, it picks up pollen and transfers it to other flowers.

The melon fly Bactrocera cucurbitae  is a major crop pest in many parts of Asia and the Pacific; it accumulates and stores zingerone in its pheromone gland to attract females. In contrast, B. papayae  and B. dorsalis  males reduce zingerone to the alcohol zingerol, storing the zingerol to use as an attractant for females.