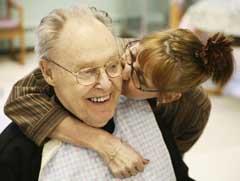 The indicator used in the 'blue bottle' reaction?

Yes. Methylene blue, or methylthioninium chloride, is used in the classic demonstration of chemical kinetics. An aqueous solution is made up of methylene blue with a strong alkali such as sodium hydroxide, plus glucose. On shaking, this colourless solution turns blue, and on standing, the colour disappears. 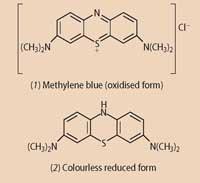 In its normal, oxidised, form methylene blue has an ionic structure (1)

and catalyses the oxidation of the dissolved glucose while itself being reduced to the colourless form (2). When the bottle is shaken oxygen from air trapped in the bottle dissolves into the solution, oxidising the methylene blue to its blue ion. When left to stand oxygen cannot easily dissolve into the solution, the dye is reduced by glucose, and turns colour-less again.1

Does the dye have any medical uses?

Methylene blue is used to treat certain fungal infections in fish, and for many years it was used to treat malaria. The dye inhibits the enzyme glutathione reductase, which protects the malarial parasite, Plasmodium falciparum, from oxidative damage. But methylene blue became an unpopular antimalarial because the patient's urine and faeces turned blue. However, scientists are still investigating its use in combination with other drugs, such as chloroquine, to treat malaria.

Has methylene blue been in the news recently?

In July 2008 scientists from the University of Aberdeen, led by Professor Claude Wischik, reported that the drug Rember, which is based on methylene blue, considerably reduced the rate of mental decline associated with Alzheimer's disease (AD). In a small phase II clinical trial on 321 patients with mild to moderate AD, Rember slowed the progression of dementia in 81 per cent of patients taking the drug.

The onset of AD is linked with the formation in the brain of insoluble plaques of the peptide β-amyloid and clumps of a protein called tau. According to the scientists, Rember inhibits the tau protein from forming clumps, or neurofibrillary tangles, that build up inside nerve cells in the brain. The accumulation of these tangles causes nerve cells to die, leading to the symptoms of memory loss associated with AD.

Scientists have known for some years that methylene blue increases mitochondrial oxygen consumption. So the chemical's speeding up of metabolic processes may play a role in treating AD too. More extensive phase III trials of Rember are planned for 2009.

What else is methylene blue used for?

It is used as a stain in bacteriology. Cell cytoplasms usually bear a negative charge, and these attract the blue cations, dyeing the bacteria blue.