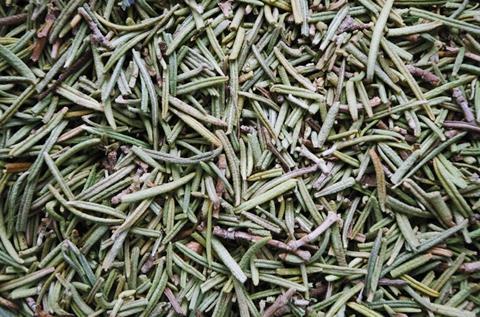 That's from a Shakespeare play, isn't it?

Yes, in act IV scene v of Hamlet, Ophelia says it to Hamlet:

And is there any connection?

One link is that the plant symbolises remembering the dead. In act IV scene v of Romeo and Juliet, rosemary was placed on Juliet's body for her burial ('Stick your rosemary on this fair cor[p]se'). Australians wear a sprig of rosemary on Anzac day to honour the dead soldiers of World War I. The herb grows wild on the Gallipoli peninsula, Turkey, where many Anzacs died during the ill-fated Allied campaign of 1915.

Is there any evidence that rosemary helps memory?

Recent research by Dr Mark Moss and his colleagues at Northumbria University in Newcastle suggests that exposure to rosemary oil can enhance long-term memory by ca 15 per cent.

Rosemary contains hundreds of different chemicals. The herb has been used in medicine as a stimulant, possibly owing to its camphor (1) content, while cineole (eucalyptol, 2) and camphor are among the molecules that give the plant microbiocidal properties. Rosemary has long been used as a food preservative. The plant contains antioxidants such as rosemarinic acid (3) and carnosic acid (4). But possibly the most interesting chemical component that affects memory is ursolic acid (5). 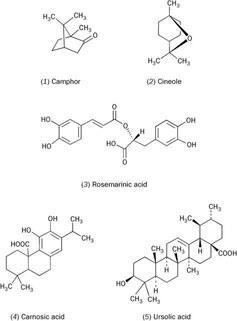 Ursolic acid inhibits acetylcholinesterase. This the enzyme catalyses the breakdown of the neurotransmitter chemical acetylcholine, which is important for effective cognition and reasoning. The degeneration of acetylcholine-producing neurons in the brains of people with Alzheimer's disease (AD) has been blamed for the symptom of memory loss associated with AD. Thus, sustaining acetylcholine levels may help delay this memory loss. Ursolic acid has also been shown to slow skin tumour development.

Does rosemary have any other medicinal uses?

Rosemary has been used to treat migraine, aching muscles, exhaustion, digestive problems, as well as arthritis. If the herb is only efficacious in a fraction of the complaints it is attributed to treat, this suggests that serious study of the medicinal properties of naturally-occurring chemicals should take place alongside the synthesis of new medicines.