Good for telling the weather, but what else? 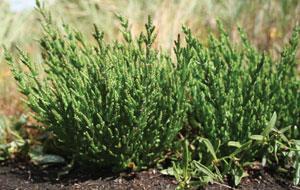 Seaweed is rich in nutrients, like β-carotene and B vitamins, as well as trace elements such as chromium and zinc; it is a very good source of iodine. Some seaweed, like samphire (Salicornia europaea), is edible; it's been eaten for hundreds of years in coastal regions of the UK, like Norfolk, and is now a fashionable foodstuff. Salicornia species grow all over the world; they're halophytes, salt-tolerant crops. With increased demand for water from the world's 7 billion humans, not to mention animals and industries, agriculture has been looking at salt-tolerant crops like Salicornia that can be grown on salt-marshes. The seeds are rich in protein (up to 35%) and oil (30%); much of the lipid content is unsaturated, not unlike safflower or sunflower oil in make-up. There is a lot more to the sea than seaweed. The algae make useful chemicals, like bromophycolides.

The red alga Callophycus serratus, an organism found throughout the tropical and subtropical Pacific Ocean, makes a family of molecules called bromophycolides.

Why does it make them?

Organisms create secondary metabolites like these for various reasons, including defence against predators and pathogens. Bromophycolides have been found to inhibit growth of Lindra thalassiae, a widespread fungal pathogen of marine plants.

What good are they to us? 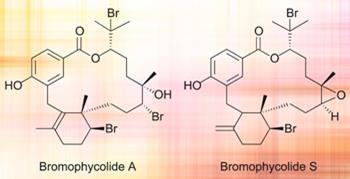 Julia Kubanek and co-workers at the Georgia Institute of Technology in Atlanta have been investigating bromophycolides from Fijian coral reefs for several years. Several are active against antibiotic-resistant bacteria and also against various human tumor cell lines. Bromophycolide A has been shown to initiate programmed cell death in some cases. More recently it has been reported that several, notably Bromophycolide S, are active against the dangerous Plasmodium falciparum malaria parasite, including at least one chloroquine-resistant strain. It's early days, though, as more tests need to be carried out, before clinical trials on humans.

We've got antimalarial drugs, why bother?

The malarial parasite develops resistance to existing anti-malarials. Bromophycolides have a structure different from other molecules, so they are likely to be active against forms of the parasite resistant to known antimalarial drugs.