Is Sunday dinner bad for you?

Everyone is aware of air pollution in cities. The mix of traffic fumes, cigarette smoke and smog from factories harms our environment and can cause respiratory disease. But little research has been done about air quality where we spend around 90% of our time: indoors. Could cooking a roast dinner at home be as bad for our health as rush-hour exhaust? The HOMEChem project decided to find out. 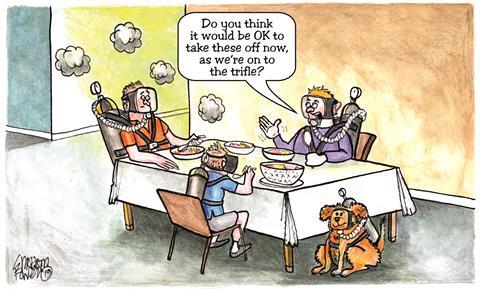 When home cooking is as unhealthy as traffic fumes and smog

Led by Marina Vance from the University of Colorado Boulder, US, and Delphine Farmer from Colorado State University, US, in June 2018 the project took control of a purpose-built house in Austin, Texas. Designed to be equivalent to most US dwellings, the team’s scientific show home came equipped with cameras and monitors to detect chemical oxidants such as ozone, hydroxyl radicals and nitrate radicals, volatile organic compounds (VOCs) and particulate matter. The researchers then spent a month performing normal household tasks – such as cooking breakfast or cleaning the bathroom – to see how they affected the chemistry of the room.

Almost immediately, the project ran into trouble: the activities were producing too much pollution to monitor effectively. Just boiling water on a gas hob created enough soot to cause readings that indicated a possible health hazard. ‘Even the simple act of making toast raised particle levels far higher than expected,’ Marina told the national meeting of the American Association for the Advancement of Science. ‘We had to go adjust many of the instruments.’

The greatest dip in air quality came when the team prepared a full out-of-season Thanksgiving roast dinner featuring turkey, Brussels sprouts, boiled sweet potatoes, bread stuffing and cranberry sauce. In doing so, the house’s PM2.5 (particulate matter with a diameter less than 2.5 micrometres) levels skyrocketed to around 200µgm-3 for an hour – worse than street levels typically seen in New Delhi, India or Beijing, China. While most PM2.5 research is based on much longer exposure (in the EU, the legal limit for PM2.5 is an annual mean of 25µgm-3), the study’s Thanksgiving peak still hit the threshold for short-term exposure that could be hazardous to health.

This doesn’t mean it’s time to ditch Sunday lunchtime’s roast. HOMEChem’s full results are still pending, and the study reassures people that the toxic turkey cloud could be mitigated with proper ventilation such as open windows and an extractor fan. It’s also worth remembering that the smell of the VOCs measured in the study are an important part of giving food its taste – which is why food on aeroplanes, where reduced air pressure causes aromatic molecules to spread further apart, lacks flavour.

Instead, the real take-home message is that, when it comes to air quality, we need to think about how our indoor activities affect our health, homes and surroundings. ‘Homes have never been considered an important source of outdoor air pollution,’ says Marina, ‘and the moment is right to start exploring that.’