Time to get out the vitamin D

During these winter months it can feel like we never see the sun in the UK – arriving at our schools and offices before it has risen and leaving after it has gone down. One of the health concerns associated with this time of year is depleted vitamin D levels, with roughly one in five people in the UK reportedly now having low levels of this vitamin.

Unlike the other essential vitamins, food is not our main source of vitamin D – sunlight is. This gives it its nickname: the sunshine vitamin. But there is not sufficient UVB radiation in the sun’s rays that reach the UK, and indeed most of northern Europe, during the autumn and winter months for our bodies to synthesise enough of the chemical. 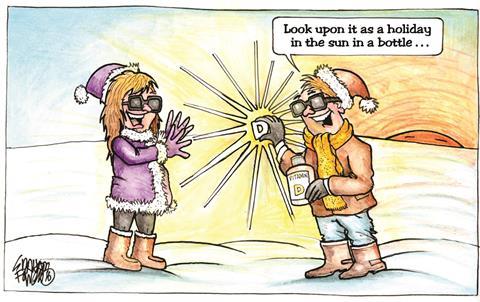 We previously thought that the vitamin D made during the summer months was enough to keep us healthy all year, but official guidance on this has recently changed. In July 2016, UK public health officials recommended for the first time that everyone should consider taking a daily supplement of 10 micrograms of vitamin D during the darker months.

There is also a growing concern that some people are limiting their outdoor time so much, or covering themselves so extensively from the sun’s rays, that they are not making enough during the rest of the year either. For those people, it is being recommended that they take a supplement all year round.

Vitamin D aids the regulation of calcium and phosphorus metabolism in the body, and therefore plays a vital role in maintaining healthy bones, teeth and muscles. You might be familiar with rickets cases in children caused by low levels of this vitamin, but less widely known is the risk of fragile bones in adults and the, suspected but not yet proven, increased risk of certain cancers, multiple sclerosis and cardiovascular disease.

Vitamin D is actually a group of fat-soluble secosteroids, of which vitamin D3 (cholecalciferol) is thought to be the most important. Our bodies make vitamin D3 in a two steps, starting from 7-dehydrocholesterol. This precursor is naturally present in our skin and, as its name suggests, also has a role in cholesterol synthesis. Firstly, UV light causes one of the rings in this precursor molecule to open to form previtamin D. This molecule then undergoes a cis–trans isomerisation reaction to form vitamin D3.

But this is not the end of the story, as it is actually vitamin D3’s metabolite that does its magic in the body: 1,25-dihydroxyvitamin D3. The transformation to the active metabolite involves two hydroxylation reactions, the first in the liver and the second in the kidney.

So while popping a vitamin tablet with breakfast each morning won’t come with the delicious ‘warm to the bone’ feeling that the sun gives during the summer months, official advice now states that it will at least keep us healthy.