Could wood be our new biofuel? 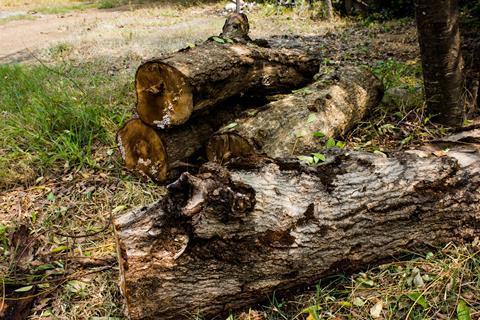 Can chemists unlock the chemicals from wood?

Dead wood is abundant. Indeed chemists are already looking to the woody parts of plants that end up as agricultural waste as potential biofuels and as an alternative source of industrial chemicals from oil. But it’s not that easy, or is it?

Wood is made up of the polysaccharides cellulose and hemicellulose surrounded by the highly branched polymer, lignin. Lignin bonds to carbohydrates in the plant, and crosslinks to the polysaccharides. All in all, this is what makes wood tough and rigid. And herein lies the problem.

What chemists really want is the lignin and cellulose separated. Lignin can then be converted into different products or used in composite materials, such as ‘plastic wood’. Cellulose can be used in advanced composites and the synthesis of plastics, which would provide a move away from obtaining these materials from oil-based chemicals. But separating lignin from cellulose and hemicellulose is an expensive, energy-intensive process, requiring high temperatures and pressures. The process also uses polluting chemicals such as caustic soda and sodium sulfide.

Now chemists at Queen’s University Belfast (QUB) have discovered a greener way to separate the chemicals that make up wood. Reporting in the Royal Society of Chemistry’s Green chemistry journal, Professor Robin Rogers and his colleagues describe a process that involves dissolving the wood in ‘ionic liquids’.

Ionic compounds are usually high melting point solids, such as sodium chloride. But in the late 1940s US chemists, Frank Hurley and Tom Weir, when looking for a quick way to electroplate aluminium, discovered by mixing and gently warming a powdered organic salt – an alkylpyridinium chloride – with aluminium chloride, the powders reacted, forming a clear, colourless liquid. This was one of the first ‘ionic liquids’.

Ionic liquids have some very useful properties – they can dissolve many different compounds, they do not evaporate, they are typically non-combustible and can be non-toxic, making them ideal green solvents. In a crystalline lattice like sodium chloride, the ions behave like many apples packed in a box. However, if bulky organic anions replace the chloride anions, these cannot pack so neatly and it takes much less energy to break the ions apart – their lattice energy is low enough to stop the mixture crystallising and it remains liquid.

The QUB researchers found that wood chips from both softwood and hardwood trees, after mild grinding to form a powder, dissolved completely in their ionic liquid – which comprises an ethanoate anion – under mild temperatures and low pressure. The researchers then extracted the cellulose and the lignin using different propanone–water mixtures, and recovered the ionic liquid by distillation.