‘We have let down those young people who want to move onto learning technical, practical skills and get a skilled job,’ according to Damian Hinds, secretary of state for education. In the government’s response to a consultation on new T-levels, he comments that ‘academic routes are not the only path to success, but for too long our technical education system has not provided a good enough alternative’.

T-levels – technical education programmes for 16–18 year-olds – are billed as the answer. Running alongside A-levels and apprenticeships, some will begin in 2020, with science T-levels scheduled for 2021.

Set as ‘level 3’ qualifications, a T-level will be equivalent to three A-levels and will include at least 45 days of industry placement. T-levels will be based on the same occupational standards as apprenticeships, which are designed by employers. Students achieving T-levels should be able to gain skilled employment, switch to university study, or continue with technical education and training, for example a level 4/5 apprenticeship.

T-level panels, made up of employers, professional bodies and providers are responsible for developing the outline content for new T-levels. ‘What we are looking to do is simplify the system that we have got at the moment. The government currently funds a lot of different qualifications,’ says Hilary Jeffreys, chair of the T-level science panel and Royal Society of Chemistry fellow.

Simplifying the system ‘makes a lot of sense’, says Alistair Easterfield, director of science at University Technical College (UTC) in Cambridge, who sits on the science panel. ‘It’s not so much of an issue for science because the science qualification standards are relatively limited, but for colleagues in engineering it is much harder.’

One aim is to meet the looming skills gap in the technician workforce. According to a recent report from the House of Lords Economic Affairs Committee, ‘many graduates appear to be in jobs which do not require a degree-level education and, at the same time, many businesses are reporting skills shortages, particularly at technician level’. ’One problem is graduates in technical roles tend to move on quickly, so employers spend more time training replacements’, says science panel member Toby Underwood, accreditation and careers manager at the Royal Society of Chemistry. ‘Someone with an apprenticeship or T-level is likely to stay with the same employer for more than two years.’

T-levels will cover 15 technical routes; one of these will be ‘health and science’. Each route splits into pathways and clusters based on occupations. For example, students can choose the science T-level, which falls under the ‘health and science route’. Within that, they could choose to study ‘occupational specialisms’ for food technologist, laboratory technician, animal technologist or metrology technician.

‘Students will come out of a T-level with threshold competency to start a job,’ says Julie Toher, relationship manager for the health and science panels at the Department for Education (DfE). ‘We acknowledge that they won’t be fully occupationally competent because they won’t have been doing the job in the same way as an apprentice has. But the T-level student will have a sounder background knowledge.’

T-levels in each pathway will begin with a common taught core, which could allow students to transfer to different T-levels within their chosen route, and in some cases, between routes. ‘There will be some skills that are relevant to all technical occupations within the health and science route, such as basic lab health and safety,’ says Julie. The core component will teach students how their industry works, and will also include an employer-set project. 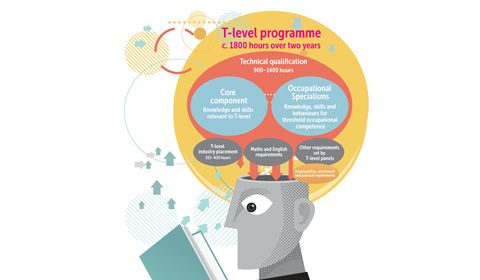 Details to iron out

Additional taught hours and industry placements will undoubtedly cost more than current programmes. The government has promised additional funding to meet costs and will allocate some T-levels more than others, adding that, ‘The main challenge identified in the consultation was making sure that staff have sufficient expertise, as providers will need to up-skill current teaching staff and recruit additional skilled staff’. A support programme is being lined up to help providers, including up to £20 million to ‘improve the quality of teaching over the next two years’.

The T-levels consultation also highlighted concerns over whether there would be enough industry placements in all regions. The government’s response acknowledges that placements will be ‘challenging to deliver on a national scale’. Another worry is what will happen to existing qualifications, such as BTECs, once funding shifts to T-levels.

The government states it is ‘aware of the concerns about removing qualifications that are well established and supported by employers’. However, it will only fund the ‘group of qualifications that serve a genuine and useful purpose, are of high quality and enable students to progress to meaningful outcomes’.

A review is under way to decide which technical qualifications will retain funding. ‘It could be that we do still fund a number of these qualifications in certain circumstances, but the T-level will be our preferred route,’ says Julie.