From Cambridge to Hanoi: the journey to the International Chemistry Olympiad 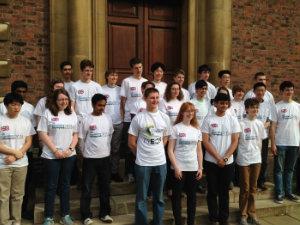 The UK Chemistry Olympiad is a national chemistry competition for post-16 students run by the Royal Society of Chemistry and has been ingrained in my school’s calendar for over a decade. Each February, like teachers across the country, I mark and post my students’ Round 1 test papers. Occasionally one of them scores in the top 25 and is invited to Round 2 of the competition. However, I had no idea what the 2nd round involved or where it could lead until I had the opportunity to follow the process from start to finish.

This year, as a new member of the UK Olympiad working group, I was invited to follow the students through the second round selection process and join the successful team of four as they represented the UK in the 46th International Chemistry Olympiad in Hanoi, Vietnam.

Taking it in their stride

In March, nervous hopefuls from all walks of life arrived at St Catharine’s College, Cambridge, for a weekend of theoretical and practical tests. A practical exam filled the first morning. Unfamiliar techniques were explained and guidance given before the students stirred, measured and, in some cases, spilled their way through the tasks. What followed appeared to be the hardest written paper most had ever experienced. However, the phenomenal marks that many achieved suggested that the students had taken it well in their stride.

In front of many nervous competitors, the results were announced on the final morning. The top four students – Osaid, Katherine, George and Richard – were chosen to represent the UK in Vietnam.

For most this was the end of their Olympiad journey, but for the UK team it was just the beginning. Two intensive training events were held in Cheltenham and Cambridge where the team reviewed theory; wrestled with the tortuous Vietnamese practice problems; spent hours in laboratories honing their skills and, most importantly, shopped for the team uniform.

As my school celebrated its last assembly of the year, I arrived at Burlington House, London, for a reception with the team, their families and their teachers. With their supporters wishing them good luck, the team were whisked off to Heathrow and an overnight flight to Bangkok and then on to Hanoi.

Snake heads (and other tests)

Teams from 77 countries with 291 competitors descended on Vietnam for ten days of competition. The spectacular opening ceremony at the National Convention centre was followed by a banquet that included a course identified by the menu as ‘snake heads’.

The following day the mentors and students were separated until after the tests. The students’ mentors, Ben and Chas, were taken to inspect the laboratories before being driven to a resort an hour from Hanoi where they resided for the rest for the competition. As the students toiled in the hot laboratories, the mentors were taken on tours, translated theory papers (often from English to English) and held many meetings – the first of which continued until 2.30am.

At the end of the exams, we reviewed copies of the students’ answers and compared them to the organisers’ marks. Arbitration then followed, which involved Ben and Chas arguing and fighting for every possible mark for the UK team.

The closing ceremony saw the Vietnamese Prime Minister, and the TV cameras, arrive. The medallists were announced in reverse order – a nervous wait for the team as they were still totally unaware of their position in the competition. They performed admirably, gaining a bronze, two silvers and a gold medal. Richard’s performance, which placed him tenth in the world, was a particularly proud moment and was the culmination of a fantastic effort by all.

The students and staff all had an amazing time and our thanks go to the hosts and organising committee. On a personal note, I’d like to thank the team for making the whole experience so enjoyable. Also thanks to Ben Pilgrim, Peter Wothers and Chas McCaw who made me feel welcome and to INEOS for supporting the UK Chemistry Olympiad.

I’m very much looking forward to the competition next year!