If you want to build a spectrophotometer with students as an extended science club project, this guide takes you through how to build, calibrate and use one.

The annual BT Young Scientist is one of the largest school science competitions in the world, but there have always been low numbers of competitors with chemistry projects. Teachers suggest this might be because school labs lack the analytical equipment needed for most chemistry projects.

However, this year prizes went to a number of innovative students who built homemade spectrometers for their chemical analysis. Coupled with some traditional wet chemistry extraction methods, the students were able to analyse samples to almost professional levels.

Each spectrometer was designed with a specific purpose in mind, but all used the Beer-Lambert law, which describes the relationship between the concentration of an absorbing material and the absorbance of light, to analyse samples. The requirements of each project determined the light source, detector and output device students chose.

There’s how much caffeine in that drink? 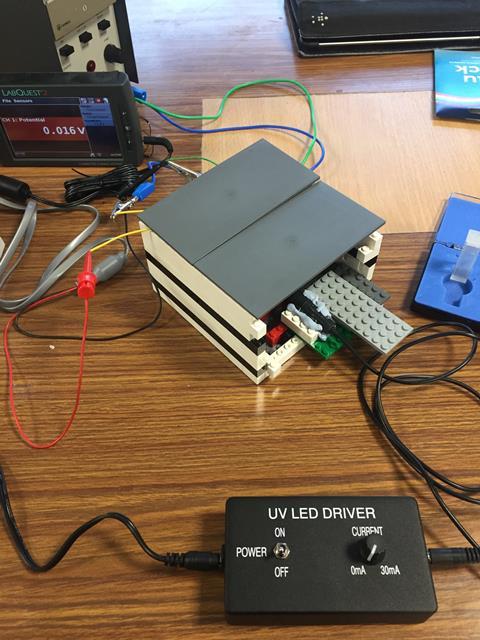 Gráinne and Caitlin built an ultraviolet (UV) spectrometer to check how much caffeine there was in different energy drinks. After some experimentation with different methods, liquid–liquid extraction with ethyl acetate proved the best for separating caffeine from the drinks they wanted to investigate.

They built their spectrometer using a 275 nm light emitting diode (UV LED) as the light source and a light sensor (a UV photodiode) as the detector with a detection range of 240–370 nm. They also included an amplifier to increase the output signal and connected everything to a power supply. The pair then used a millivoltmeter and a datalogger to read the output signal from the detector. Finally, the young scientists used Lego to position the LED, detector and cuvette (sample holder) at appropriate distances to measure absorbance values.

A recent European Food Safety Authority report found adolescents are the most likely age group to consume energy drinks. There isn’t much evidence about the effects of caffeine consumption specifically on adolescents, so it remains a question of concern.

Ava built a visual light spectrometer to measure concentrations of food dyes that reportedly affect health. She concentrated her efforts on the Blue1 food dye, which is currently used in a wide variety of foods and drinks.

She measured dyes at known concentrations to create a calibration graph. Ava then extracted the food dyes from various sweets with deionised water and determined their concentrations with her spectrometer and graph.

For her spectrometer, she used a white LED as the light source, and a light sensor – this time a photoresistor – as the detector. She also used an absorption filter to tune the spectrometer to an appropriate wavelength for analysis. As an output device she used a multimeter to measure the level of resistance from the photoresistor. The change in resistence relates to the absorbance of light by the samples.

Ava is from Derry/Londonderry and took home the 3rd junior individual prize in the chemical, physical and mathematical section. 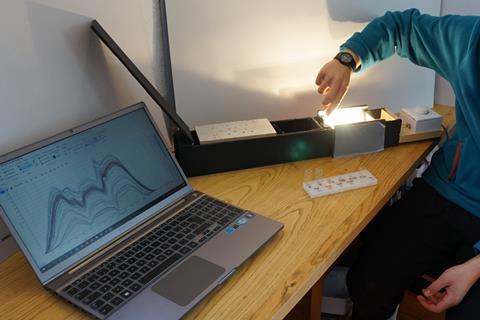 He constructed his spectrometer in a foam box with a compact fluorescent light bulb for calibration. A slit in the sealed foam box between two razor blades reduced reflection in the diffraction grating from the halogen bulb he used as the light source. For a detector he used a webcamera at a 45 degree angle to the slit to avoid over-exposure. Fionn initially used free online software that lets you capture, save and analyse spectra. However, he later decided to use professional software for its superior analysis speed.

Fionn is from Cork and won the Intel Special Student Award at this year’s exhibition.

The Royal Dublin Society hosts the BT Young Scientist and Technology award every year in early January. Now in its 54th year, the finals play host to 550 projects from nearly half of all Irish secondary schools. Schools from Northern Ireland and the Republic of Ireland compete across four categories. These winners have raised the game for chemistry with their own solutions to analytical equipment.

Do-it-yourself spectrometers aren’t the only way to let students experience analytical chemistry though. The Royal Society of Chemistry’s Spectroscopy in a Suitcase (SIAS) programme brings spectrometers to schools across the UK and Ireland for hands-on workshops. It’s also worth asking universities in your area if they’ll help run analyses for chemistry projects.