Demonstrations to capture the student's imagination, by Declan Fleming of Pate's Grammar School, Cheltenham.
In this issue: Fire pistons

One of the most intriguing pre-modern fire-lighting techniques is the use of the fire piston. One of the simplest devices possible, it relies only on the heat generated by the adiabatic compression of air to ignite a fuel.

These tools were popular in south-east Asian cultures as an alternative to friction-based fire-lighting methods. They provide a simple and pleasing demonstration suitable for use in the teaching of basic thermodynamics or the diesel combustion engine.

Adiabatic heating occurs in the field of sonochemistry. Here, tiny bubbles formed by ultrasonic vibrations collapse in on themselves in a process known as cavitation. This creates extreme environments with temperatures around 5000 K and 1000 atm of pressure in extremely small areas and for extremely short periods of time. Meanwhile, the bulk solution remains at ambient temperatures. Highly reactive intermediates can be formed under these conditions, which greatly increase the speed of certain reactions without the need for heating. 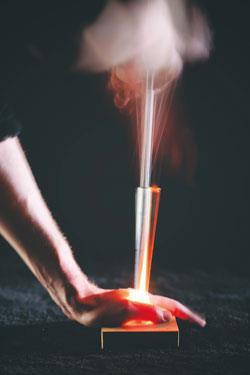 Demonstration fire pistons are commercially available from education suppliers (who will also supply you with suitable tinder such as char cloth). However, they can be constructed from a metal rod that fits fits into an acrylic tube with an o-ring to provide an air-tight fit. For instructions, see the instructional video on YouTube from Make magazine.

You should be aiming for a compression ratio of at least 15:1 from your piston. Note that while it may be tempting to produce a large-scale piston for dramatic effect, the force required for ignition will increase as a square of the cylinder radius. A 1 cm bore will require a mere 120 N while a 6 cm bore will require a less practical 4300 N!

You can make your own char cloth through the anaerobic pyrolysis of cotton. Place a few small strips of cotton (eg 2 cm x 4 cm) in the bottom of a steel can. Form a lid by wrapping the top in aluminium foil. Pierce a small hole (approximately 2 mm diameter) in the foil to allow smoke to escape. Heat the can over a Bunsen burner in a fume cupboard for approximately 30 minutes, with the air hole half open, until the can has stopped smoking. Remove the heat and place another piece of foil over the top to prevent air getting in. Wait until the can is cool before inspecting your cloth - it should now be black.

Place a piece of suitable tinder (such as char cloth) in the notch on the base of the piston. The material should be teased apart to maximise the surface area, but small enough so that it fits easily into the tube without being squeezed against the sides. Lubricate the rod so it slides smoothly in the cylinder (petroleum jelly works fine). After ensuring your hand will not obscure the audience's view, push the rod home in a single firm stroke. The tinder should light with a small flash. As you withdraw the rod, draw the audience's attention to the cloud that forms due to adiabatic cooling.

As well as being an intriguing curiosity, the fire piston provides an excellent demonstration of the principle behind the diesel engine. The Salters' A-level chemistry course covers auto-ignition and the internal combustion engine - it is likely that other 16-18 specifications do as well.

A reversible adiabatic change on an ideal gas can be described by the following expression:

where γ is the adiabatic index of a gas. For air, which mostly consists of diatomic molecules, this is approximately 1.4.

The fire piston shown easily reaches a compression ratio of 16:1, which suggests a temperature of around 900 K: more than enough to light our fuel. Diesel engines operate around a 20:1 compression ratio.

This process can also be seen by the production of a cloud in a bottle. Take a 2 litre drinks bottle and add approximately 100 cm3 of water. Shake the bottle to create a moist atmosphere. Hold a smouldering splint inside to add some smoke particles to nucleate droplet growth. Seal the bottle and squeeze repeatedly. Each time you relax the bottle, the gas will adiabatically cool to generate a cloud.

How to make a fire piston

External links will open in a new browser window

Download this article as it originally appeared in Education in Chemistry